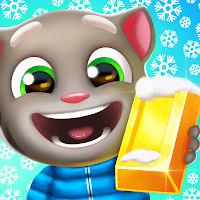 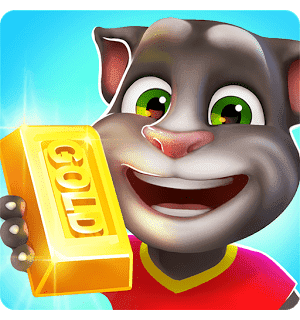 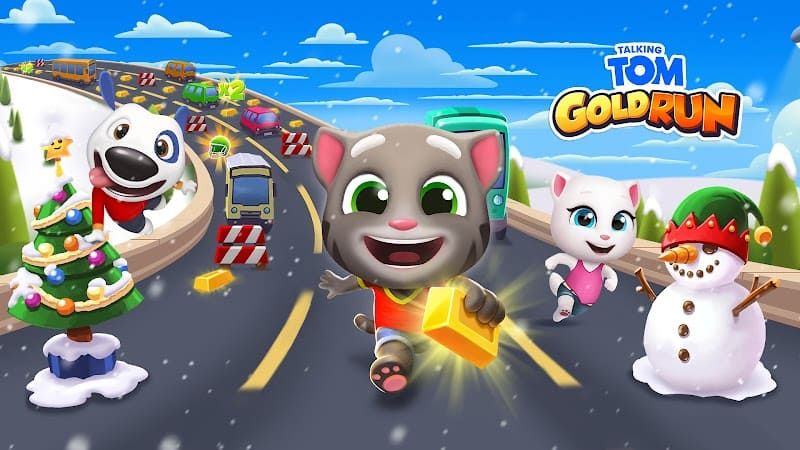 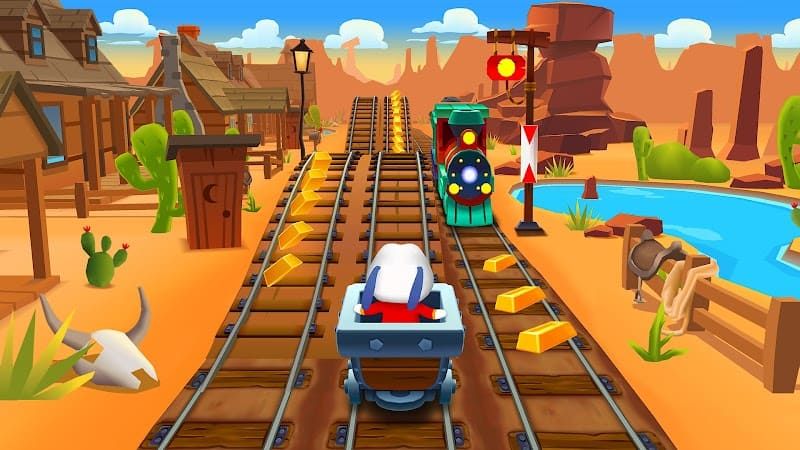 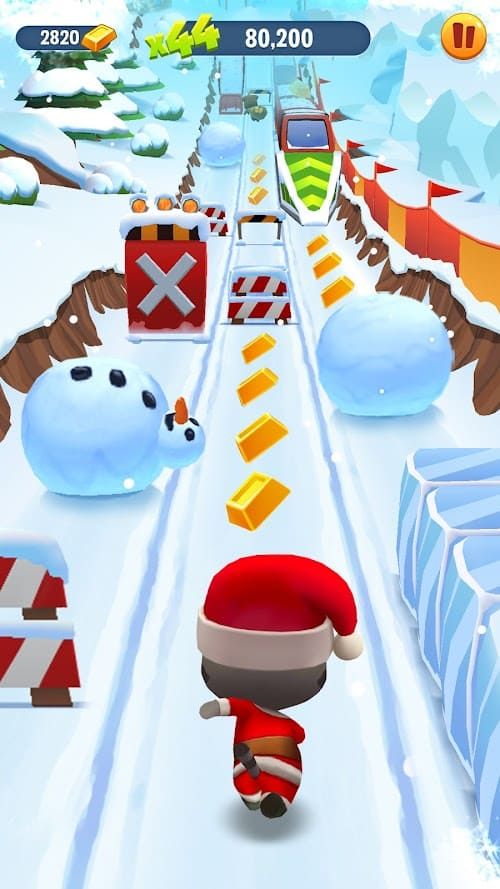 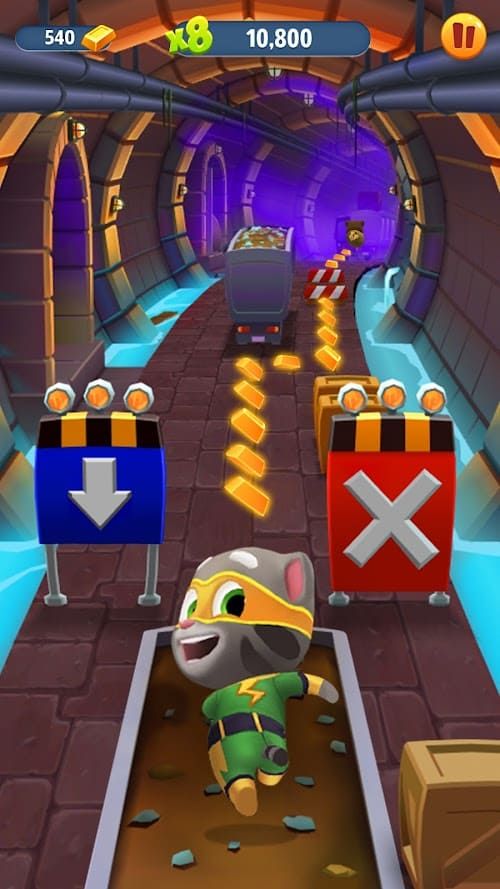 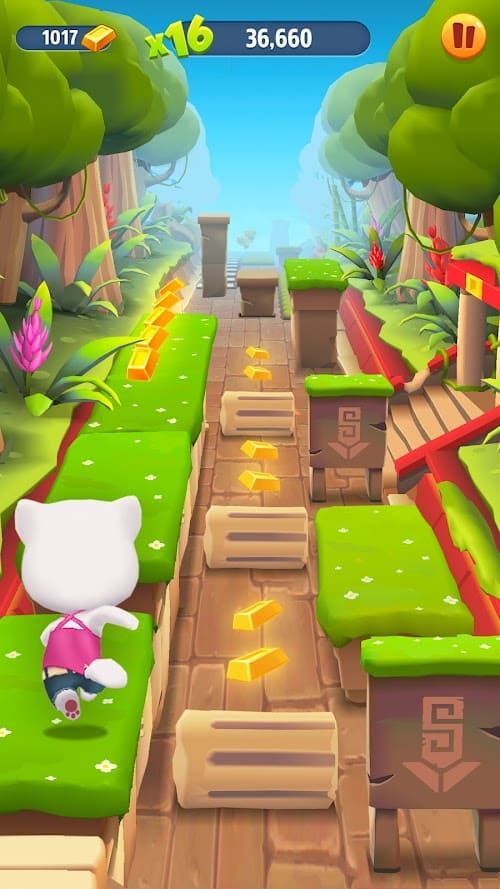 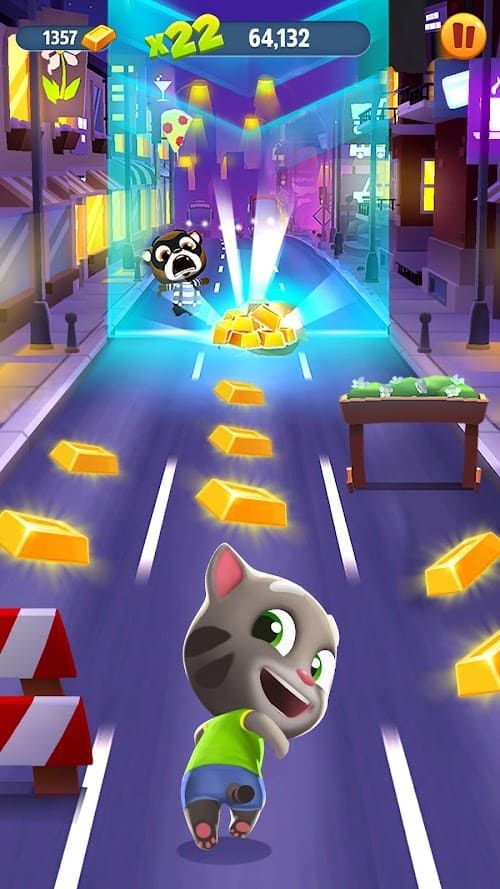 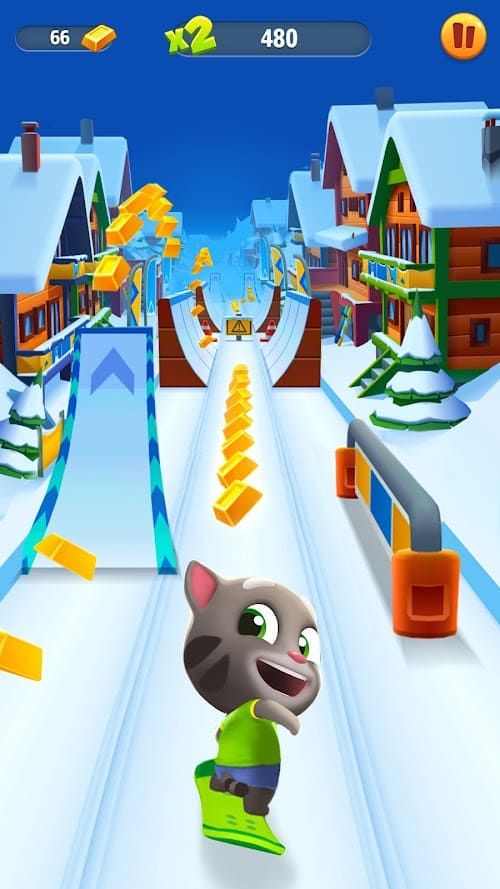 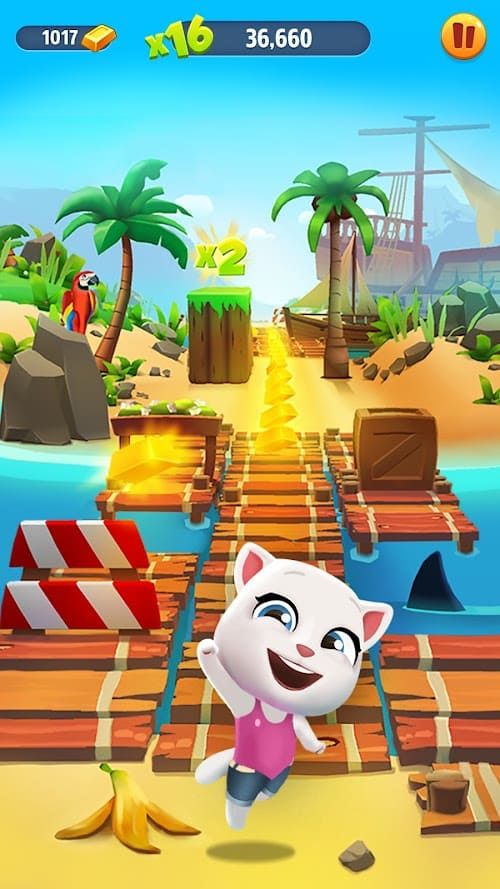 Talking Tom Gold Run is Outfit7's virtual pet game type parkour game, it is much like a cartoon animation, the family needs to navigate Tom the Cat on a continuous 3D road full of obstacles, and the game has several interesting levels. Tom will automatically run into the screen, and the player needs to swipe in the corresponding direction to go left, right, jump or scroll. Tom collects the gold bars left by the preceding characters he is chasing along the way, and as a player, when you are playing Talking Tom Gold Run, you will encounter some obstacles that prevent you from getting gold coins. The object of the game is to keep running for as long as possible, collect gold coins and avoid getting hit by obstacles on the way. After getting these gold bars, players can use them to upgrade Tom's house and swimming pool.

Talking Tom Gold Rush is a game app for iOS and Android devices and is suitable for users of all ages, the characters in the game are very cute, so it is likely to appeal to younger children. It is the most amazing and fun parkour game. In this game, the player's main job is to run freely with Tom and collect gold coins, which can then be used to rebuild their homes. The most amazing thing about this game is that there are different types of maps in this game. Also, the music on each map is different. So when players play this game, it doesn't give you a monotonous feeling. Although the game does not have overly exciting elements, players can experience the excitement of jumping over obstacles and grabbing various boosters to experience the joy of leaping over the train. Also, all the details in this game are perfect. Players can enjoy the snow falling from the sky and also see all the clouds floating freely. Players will definitely experience relaxation and wonder when they are happy.

So players don't need to worry about anything else. You just need to have quick reflexes and run forward decisively, and when you are in front of an obstacle, you have to act immediately. As the playing time increases, the player's ability will be improved, and you will experience a sense of achievement at this time. It's a very wonderful feeling. You will experience the feeling of flying freely like a bird. But when you fly, you have to be careful of any obstacles ahead or you will face the end of the game. Tom's run should avoid any obstacles in this game. At first, many players will try to run faster, it will be a bit difficult for novice players to control balance and speed at the same time, it is easy to hit obstacles at the beginning of the game. But as long as the player tries a few times and gets a sense of control in running, gradually you will discover the skill and feel of keeping your balance.

Notably, this app features both in-app purchases and advertising. While the game is free to play, in-app purchases allow players to access different features and worlds, as well as buy more coins and items. In order to play games for free, users must regularly watch advertisements for related apps. Rewards for watching 30-second banners and 30-45-second banners keep appearing between screen transitions. Most of these ads are for other gaming apps. Once the ad has been viewed by the player for a certain number of seconds, the player can return to your game by pressing the "X" in the corner.

The app has been downloaded more than 2.5 million times and has generally received positive reviews. However, some users also complained that the game uses a large amount of data and the levels are not enough. But overall, it's a very exciting game. Players will meet Talking Tom, Talking Angela, and Talking Hank in this game. Now is the time for you to spend a happy time together. Successful completion of the Robber Hunt mission is very important to the player, as it depends on whether the player can rebuild the house. Remember, you can't lose your sense of direction and speed as much as possible. But Talking Tom is agile, and together you make a perfect team, and Tom will be your perfect partner for this task. Come join the Talking Tom Gold Run.