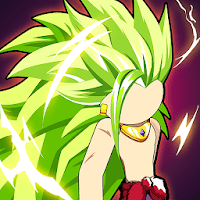 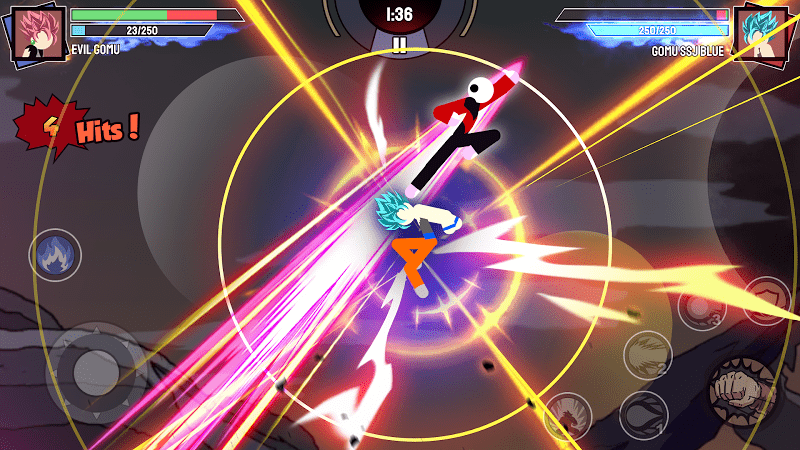 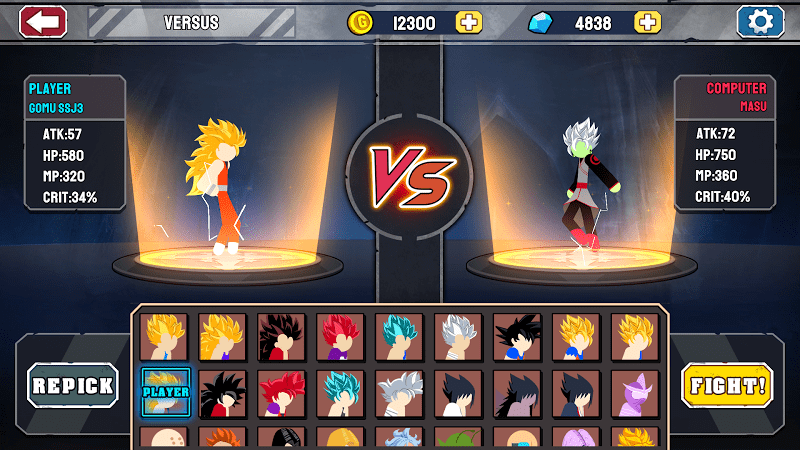 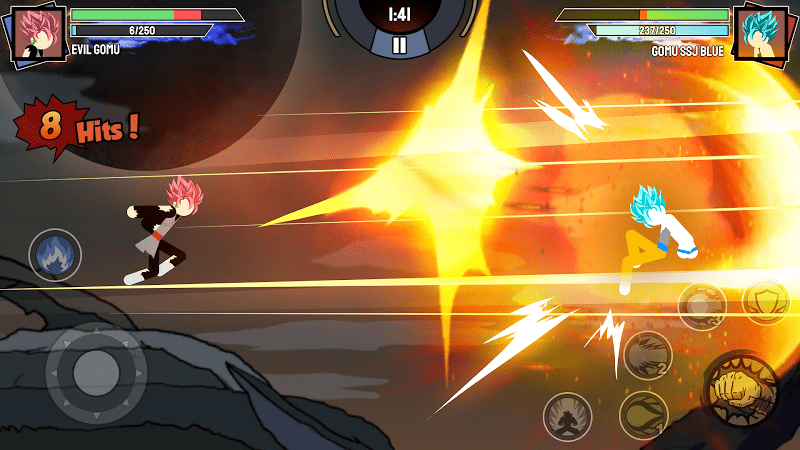 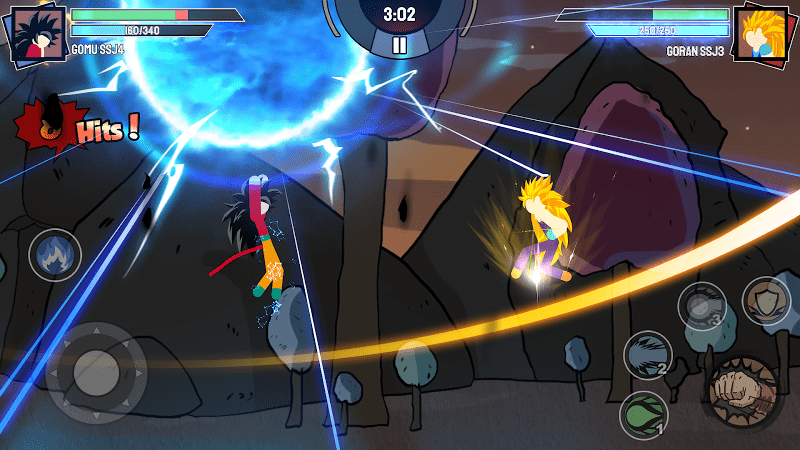 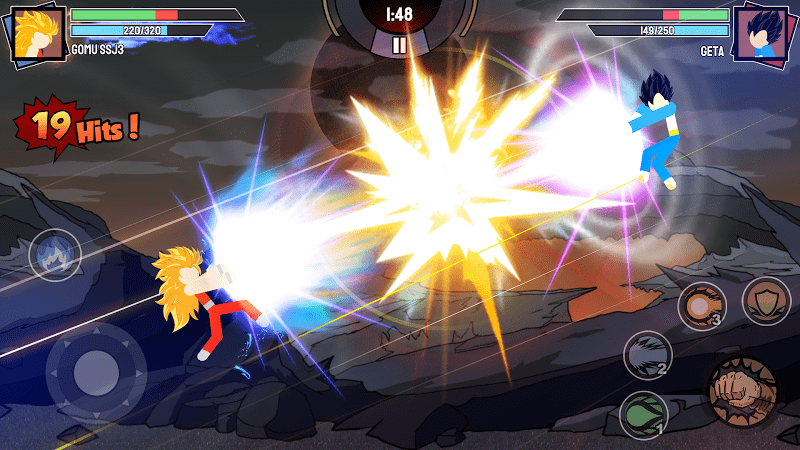 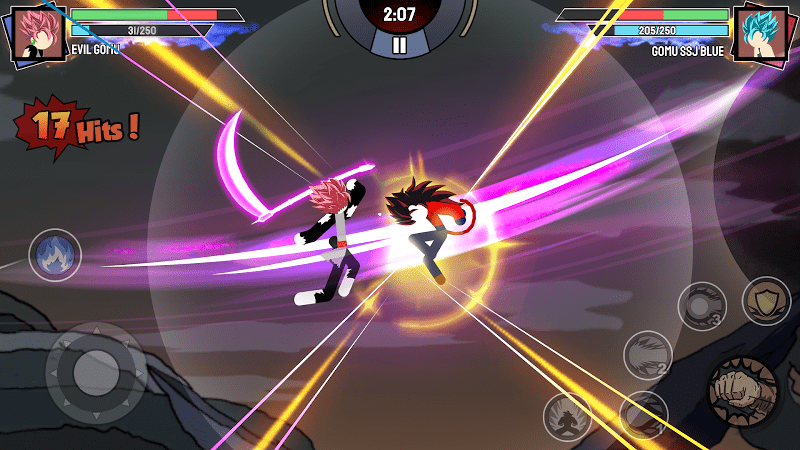 Stickman Warriors - Super Dragon Shadow Fight is a best-fighting action RPG mobile game released by SkySoft Studio. The game combines Dragon Ball and Naruto anime characters and adapts them into stickman characters. Stickman Warriors game mainly tells the story of enemies attacking the earth and superheroes protecting it. In order to protect the earth from these enemies, the super warriors of the earth gather together and wage the earth to fight the enemy in an arena.

The controls of Stickman Warriors: Super Dragon Shadow Fight are very simple and intuitive. The game supports players to avoid or attack the enemy by dodging, jumping, attacking, charging, enhancing vigor, and super skills. The direction simulation controls are in the lower-left corner of the screen, and the buttons located in the lower right corner of the screen are used to control the character to perform various attacks and defenses. It's very similar to many fighting games, but with more simplified controls and graphics. Players will experience the most basic controls ever. This actually feels very unique to play.

In Stickman Warriors, there are more than 100 stickman warrior characters from Dragon Ball Z and Naruto available for players, and they have unique design styles and special attack skills. Because Stickman Warriors is not officially authorized by Dragon Ball and Naruto, all characters in the game are stickman-style versions. However, players who are fans of both animes can easily identify the related game characters created in the stickman version. To avoid copyright issues, the game's development team deliberately misplaced the name.

Stickman Warriors - Super Dragon Shadow Fight supports multiple game modes. It mainly includes Story Mode, Battle Mode, Training Mode, and Tournament. In the story mode, players need to constantly progress through levels, but the game has more than 144 levels to help players collect stickman warrior characters faster. In addition, the map of Stick Warriors is constantly updated. The second is the battle mode. This is a one-on-one battle that many players enjoy. Players can choose to face their favorite game characters as opponents, and, in the game, the winner will be determined after 3 rounds of battle. Then there is the training mode. Here players can practice hundreds of fighting skills and try other new characters, and this mode has no time limit, so players can practice and fight freely here. And finally, the tournament. The game will select 16 of the best fighters to participate in the battle. The player who finally defeats the other fighters will receive the glory of victory and champion.

In terms of appearance, Stickman Warriors: Super Dragon Shadow Fight is actually quite distinctive. It adapts famous anime characters and their super moves in the style of the stickman. In the game, players will find this is a cool and exciting change. It can be said that the appearance design and animation production of Stickman Warriors are very cool, and it is an epic unique existence.

Overall, Stickman Warriors: Super Dragon Shadow Fight is a very interesting and unique fighting game. In this best-action RPG fighting game, players will enjoy the unique style and fighting pleasure of stickman heroes from Naruto and Dragon Ball. It's simple and easy to play. As the player's enemies increase their strength, the player's in-game character strength also increases to the highest level. Everything is great, players just must fight for their survival and against more big bosses.