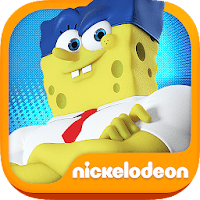 SpongeBob: Sponge on the Run
Fly like a superhero! 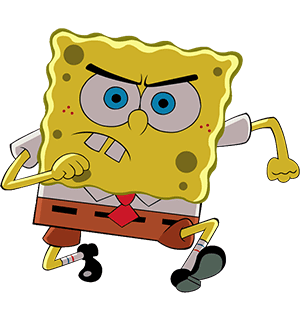 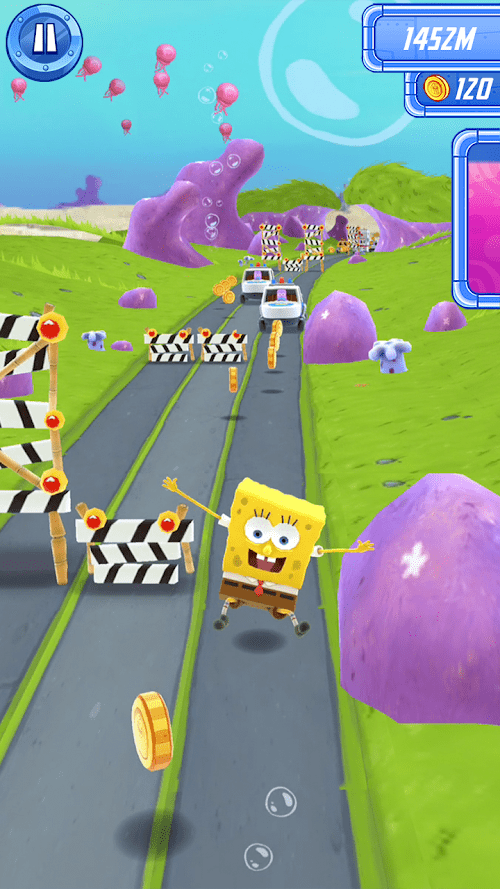 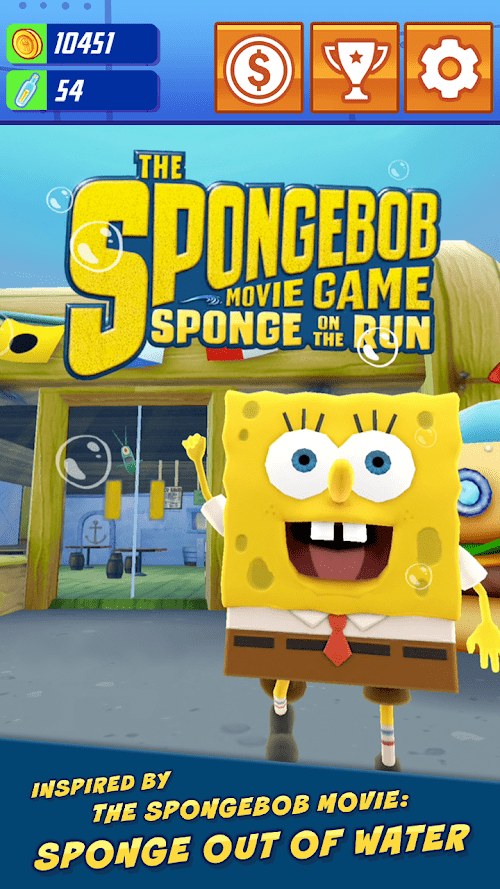 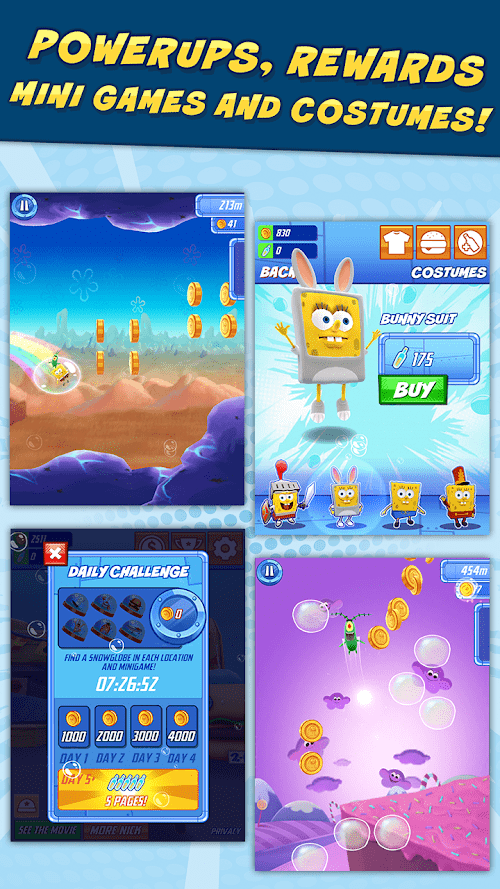 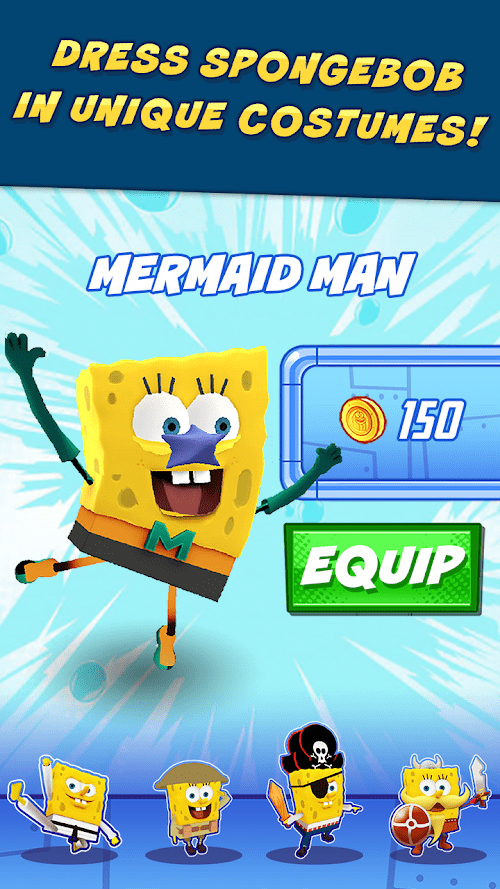 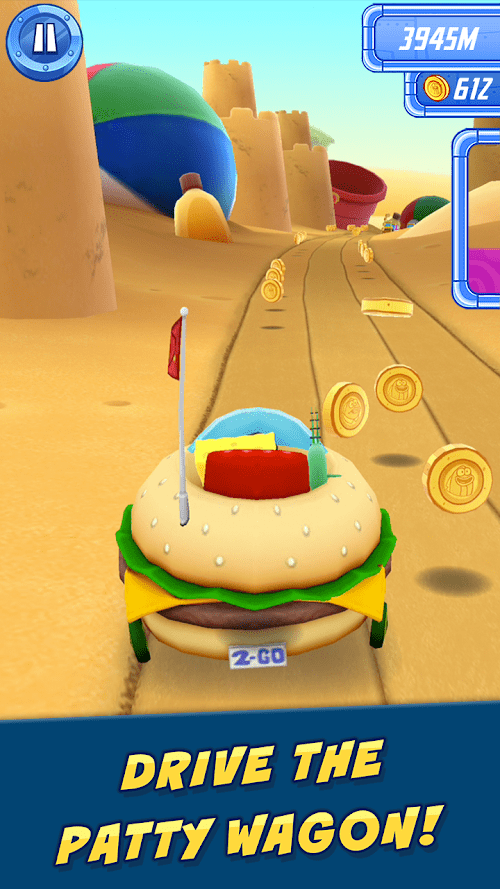 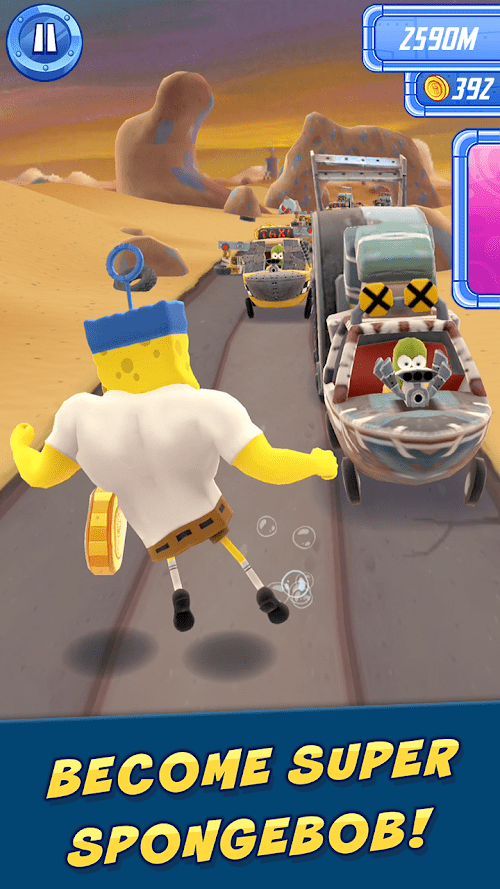 SpongeBob: Sponge on the Run is an endless racing mobile game released by Nickelodeon on January 22, 2015. It's a SpongeBob SquarePants mobile app for iPad, iPhone, iPod Touch and Android for $3.99. It's loosely based on the Spongebob Squarepants Movie: Sponge out of Water. The game is an endless running game similar to Temple Run, Subway Surfers and Despicable Me: Minion Rush. In the game, the main characters are SpongeBob SquarePants, Sheldon J. Plankton, Sandals, Gary the Snail, Jellyfish, Eugene H. Krabs, Patrick Star, Sandy Cheeks.

The synopsis of SpongeBob: sponge on the run goes like this, SpongeBob and Plankton are in Beachyburg, apocalyptic Beachy and real-world beaches in search of the secret recipe for the lost Crab Burger. When SpongeBob isn't running, he'll fly, float in bubbles, or let plankton hop in his surreal imagination. When running becomes difficult, the brave becomes heroic. SpongeBob becomes Super SpongeBob, and he can break through any obstacle.

SpongeBob: Sponge on the run has many skills and powers that can be used for players to explore, but the use of each energy is limited. Players can increase the duration of upgrade items by spending money. First up is Patty Wagon, which gives players a head start. The second is the jet pack, which helps the player to reach further points. Third, is the shield, which mainly protects the player from attacks. Fourth, magnets, players can use to grab nearby coins. Fifth, Cupcakes, is a mini-game where players need to tilt the device to move the plankton while collecting coins and jumping on bubbles to reach the finish line. This little game takes place in SpongeBob's mind. This is a side-scrolling mini-game where players need to tap SpongeBob SquarePants and Plankton's bubbles to collect coins and reach the finish line. Sixth, Gary the Snail, which slows the player down when necessary. Additionally, there are some items players need to be aware of in SpongeBob: sponge on the run. The first is gold, which can be used to buy clothing and upgrade items. Then there are pages, which can be used to ride Patty Wagon, resurrect SpongeBob SquarePants, level up, or buy outfits. Finally, there is the marshmallow, when the player collects a certain number of marshmallows for SpongeBob, SpongeBob turns into an invincible bubble, and he can break through any obstacles in his way.

Of course, what's interesting about the game is that it has unexpected twists, like players being able to make SpongeBob fly like a superhero. SpongeBob can drive a meatloaf car. Players can also venture off the beaten track, like floating SpongeBob in a coral forest or flying over obstacles with a plankton jetpack. Players can run farther than their friends and then compare the distance and score after the run. In addition, the game's custom animations and voiceovers with SpongeBob SquarePants and Plankton were specially created for this game, and players will experience a rich and vivid gameplay experience.

If the player has played the game SpongeBob game Station, the player will find that they are similar because they all have the same operating mechanism. Overall, SpongeBob: sponge on the run is an excellent game, players can download it on Google Play and Apple Store, and then, start your experience. Travel through all the new worlds in spongebob: sponge on the run.