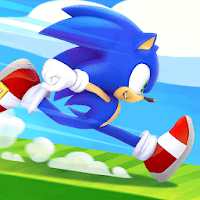 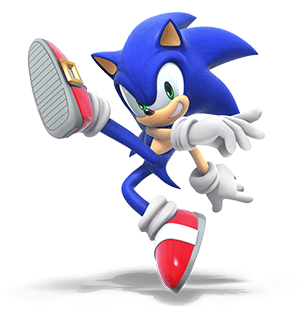 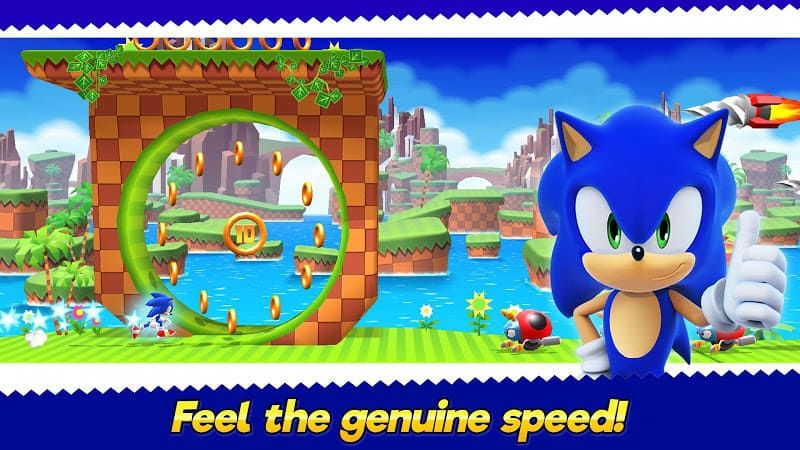 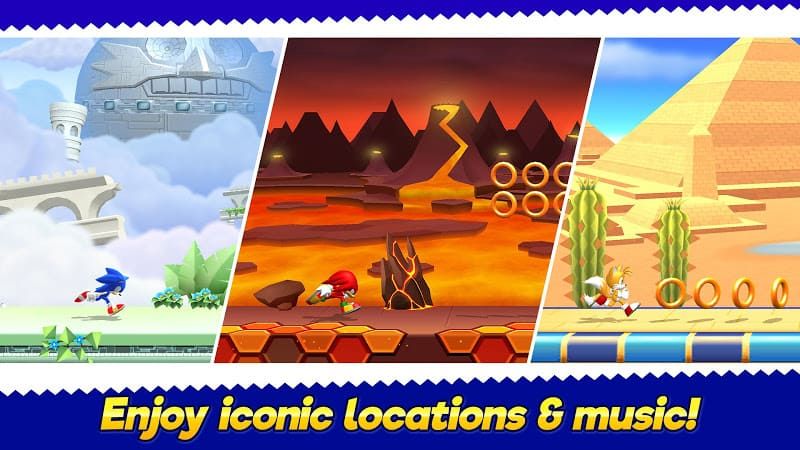 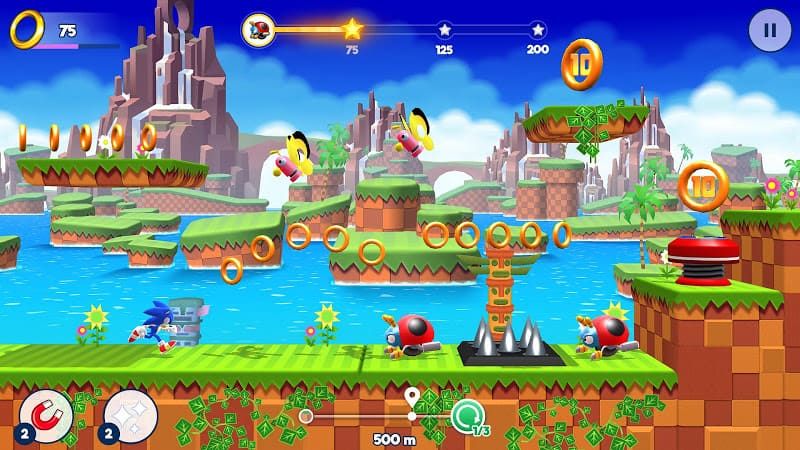 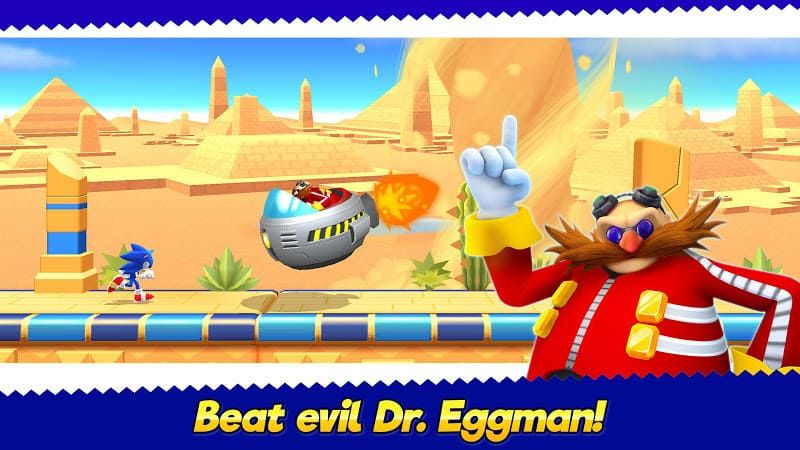 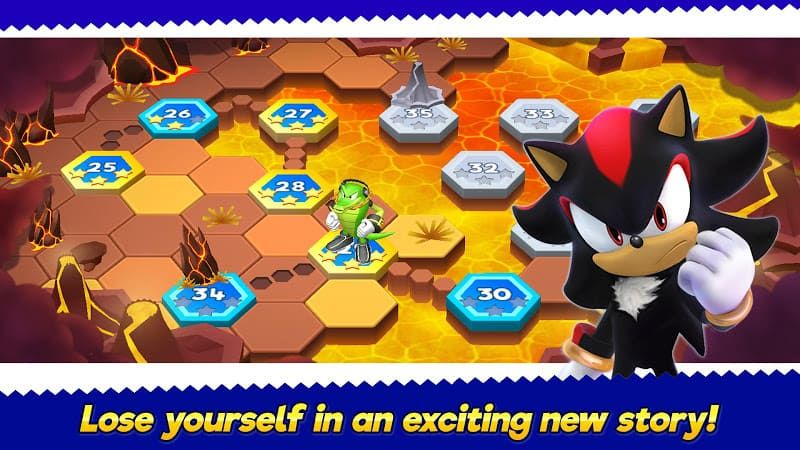 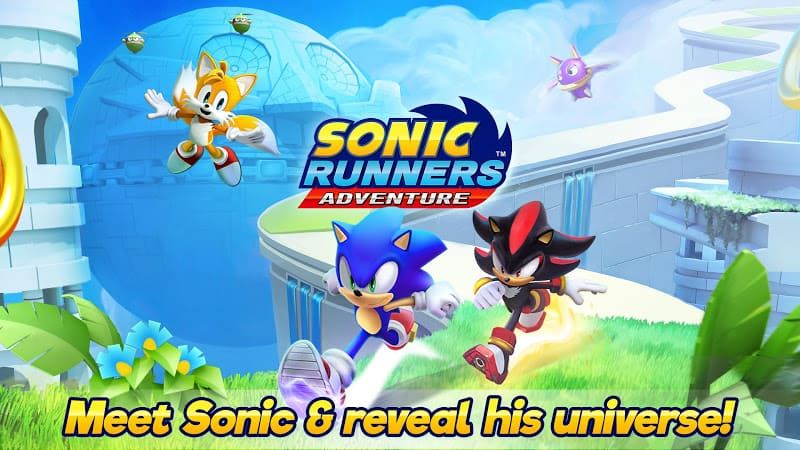 Sonic Runners Adventure game is an adventure mobile game released by Gameloft on December 20, 2017. The game is a side auto-run platformer. The player controls your jumps here. Players need to jump through gaps, bounce robots, and complete challenges before reaching the end of each level. So, there are a few different ideas introduced in the game, like looping levels that let you take a different route each time and limitations on ticking clocks that allow you to find the fastest path. Players need to complete levels and missions while earning stars and unlocking new levels. Each subsequent level opens only after successfully passing the previous level. Therefore, players need to complete at least one mission and earn at least one star. In addition, the game needs to collect a certain number of stars to open some special levels. Players need to pay attention to the stars displayed next to the locks above these levels in the main menu. Starting from the second level, to open each subsequent chapter, the player not only needs to collect a certain number of stars but also needs to successfully complete the level with the boss of the previous chapter. This means that the player has completed at least one of the missions. Players can see how many stars are required by scrolling to the desired chapter in the main menu. The chapter opens once you have collected the required number of stars and successfully completed the required boss level. The game has three types of levels, namely the ultimate level, the loop level, and the infinite level. In the ultimate level, the player needs to run to the finish line to successfully complete the level. If you complete missions and get stars, the player still needs to reach the end of the level to keep the stars. Otherwise, the player will have to redo the mission in the next game. Looping levels are usually short levels that repeat in a loop. Players need to run to the last lap to successfully complete the level and save the stars earned in the match. Infinite levels have no end, you can only clear them after successfully completing all missions. Once completed, the level will end immediately. Otherwise, the player can run along with it until the player's character is defeated or until the time runs out.

Between levels in the game, players can spend accumulated rings to unlock or level up characters, buy passive rewards in the form of Chaos, or buy one-time "booster" items. But none of these items can be purchased with real money, as the game doesn't currently have any in-app purchases. The Sonic Runners Adventure game is fun to play, but its implementation is somewhat hampered by a steep rise in the difficulty curve. Most levels offer at least one easy-to-achieve goal, so players can usually keep going and then come back to reach more goals, improve scores, and earn rings. But every once in a while, there's a level where all objectives become more difficult, a wall the player has to hit a few times to keep going. In the game, the player's character runs so fast, it's hard to see what's about to happen and react enough to it. But it just means that the player is just missing out on getting more rings, or it means falling down a lower value path in the course, so to speak, it just provides an opportunity to learn the course and improve the player's performance later, while this also means immediate death, the player can spend the ring to recover and continue.

All levels in this game have unique features. Players don't need to think too much about their score or destination while enjoying the exciting feeling, there is no speed limit in the game. The player can fly as fast as possible, and nothing can stop you. Players can also do a lot of stunts in the sky, such as being able to quickly jump or turn around, to maximize that feeling of freedom. Controlling Sonic is not very difficult in terms of skills. In short, players can be themselves in this game and forget about everything else. It feels good to fly in the sky without any burden. It feels like the whole world belongs to you. It's time to release yourself, release all your bad emotions, release your energy. Don't try to maintain your speed. Join the Sonic Runners Adventure game and let it all run now.