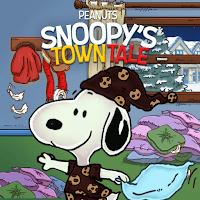 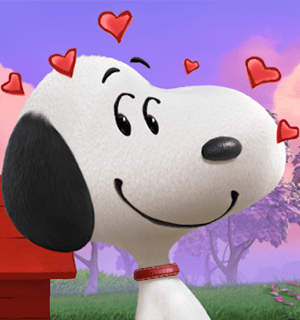 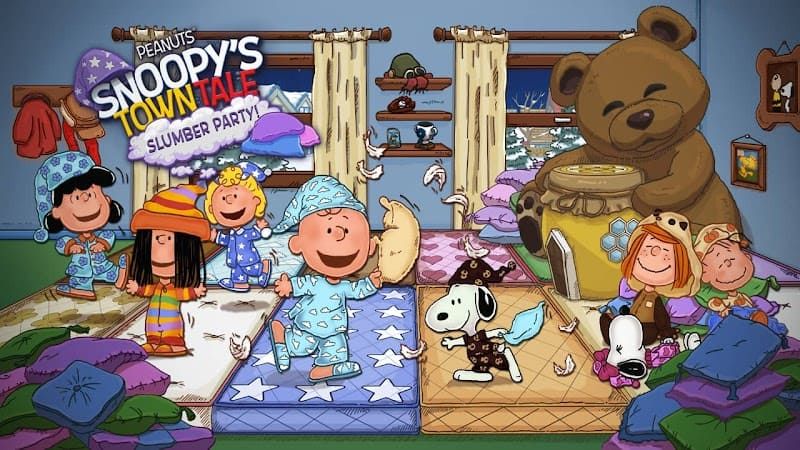 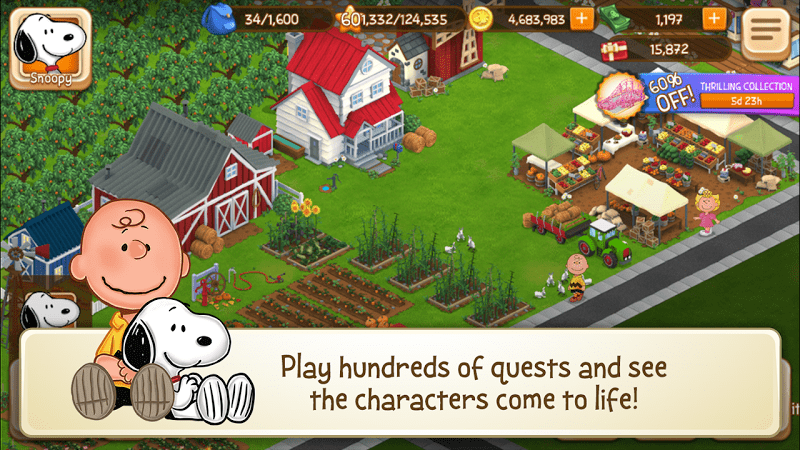 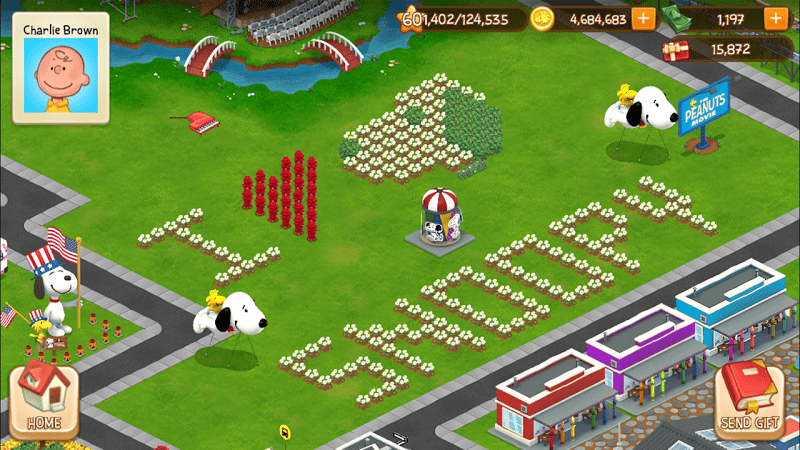 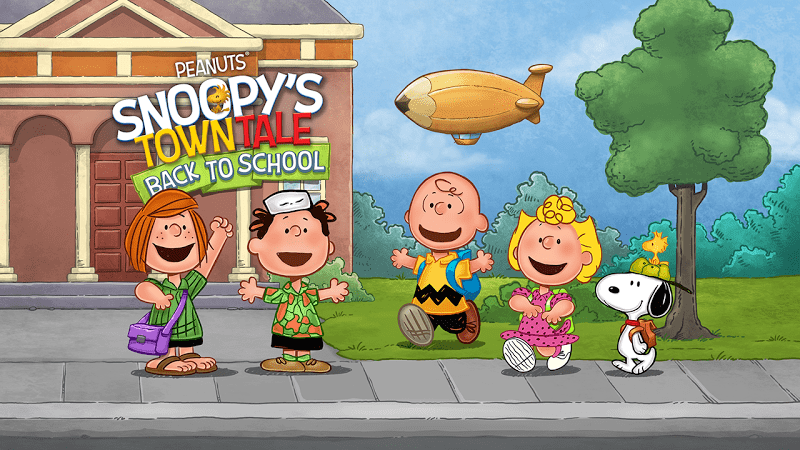 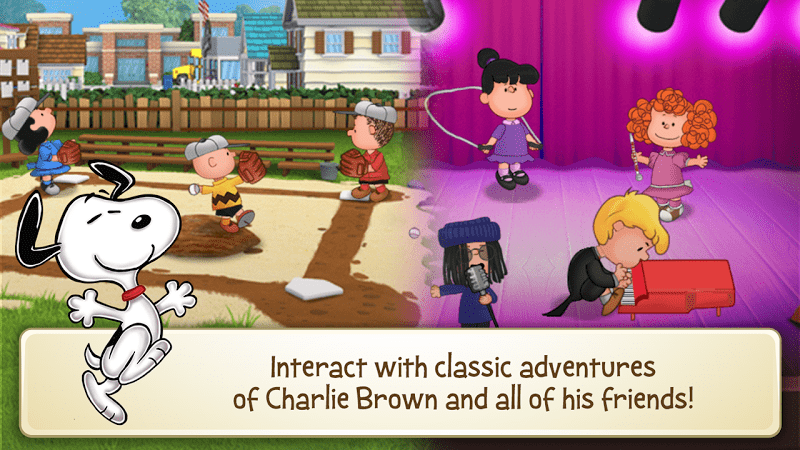 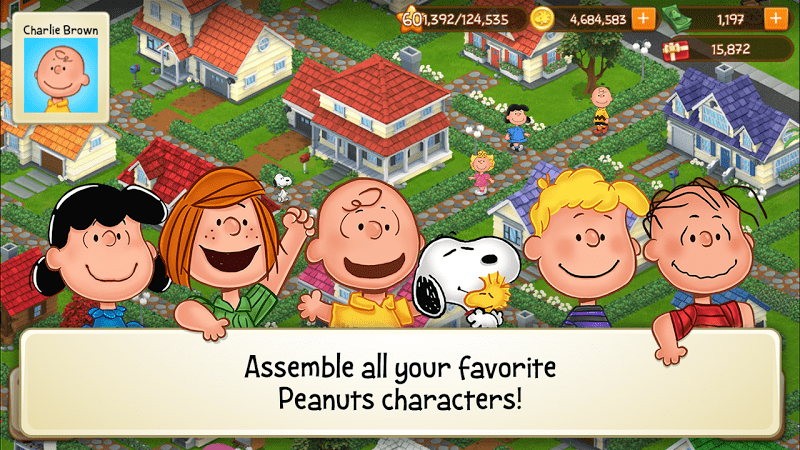 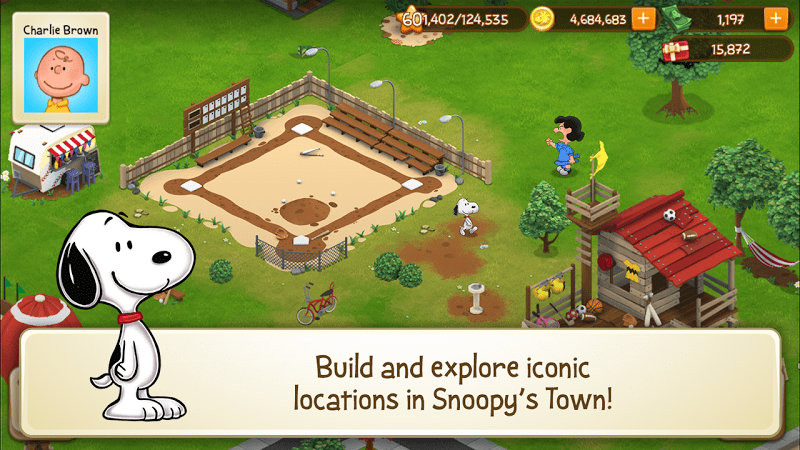 Snoopy's Town Tale CityBuilder is a simulation game published by PIXOWL INC. for iPhone, iPad and Android devices. The game is based on the 2015 Peanuts movie. Players will meet all the characters from the classic comics, such as Snoopy, Charlie Brown, Linus, Lucy, Peppermint Patty and more. But there's more to discover, including new neighbors who move next door. In addition to this, players have to complete missions and tasks to keep the town going. It's a great city-building game that may be aimed at fans of the Peanuts franchise, but the game is still likely to be loved by people who've never heard of the series because it's really fun to play.

When entering the game for the first time, Snoopy will explain most of the basics of the game through dialog boxes, after which the player will be assigned a series of tutorial tasks that are fairly easy to complete, the main purpose of which is to ensure that the player gets the hang of the game as quickly as possible. These tutorial tasks are quite beneficial to the player.

The gameplay of Snoopy's Town Tale CityBuilder is well designed and the game itself is very interesting. The best part about this game is how fast it progresses. Within about an hour of playing the game, players may have made huge progress, and this rapid progress helps keep the game fresh and interesting as players are able to keep unlocking new content to play. Essentially, Snoopy's Town Tale CityBuilder is still a very traditional city building game, as most of what the player will be doing is creating structures, unlocking new locations, renovating old buildings, etc. The lack of unique new features might disappoint some players, but most players have a good overall gaming experience with it, especially since the game does an excellent job of acquiring the basics.

In Snoopy's Town Tale CityBuilder, players can build villages and customize the world of Peanuts, design and develop cities based on the comics, and explore iconic locations. Players can also rebuild, decorate, and craft attractions such as Charlie Brown's house, baseball field, and ice-skating rink. Expand the village for a new simulation adventure, and players will build Snoopy's house, plant trees, build houses and backyards, and set up more than 200 decorations in this simulator. The main task of the player is to build wonderful houses, but building a city is not easy, players work hard and gain experience to successfully complete each task. The game's building simulator is a true copy of the comics, which won't disappoint Peanuts fans. Players are to take the opportunity to complete each mission and mission and let your village grow with you. The game also includes a pet simulator adventure where players will see Snoopy take the family to visit his kennel, and players will play dog games with Spike, Belle, and other nearby Peanuts terriers.

In terms of its appearance, Snoopy's Town Tale CityBuilder adopts the same art style like the comics and cartoons. This art style is sure to be loved by fans of the series. The colors are bright, the textures are delicate, and the character animation is very good. All this is done with some great sound effects that blend in nicely with all the visuals.

Snoopy's Town Tale CityBuilder is live on the App Store and Google Play. This is a free game with in-app purchases. It has attracted over 5 million players since its initial release and has a 4.2-star rating on Google Play. It's an excellent game, with a few hiccups but ultimately a very enjoyable experience for players. Don't wait any longer, download this game whether you are a peanut fan or not, it won't let you down.