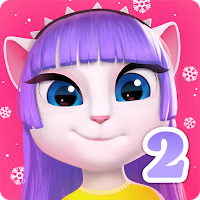 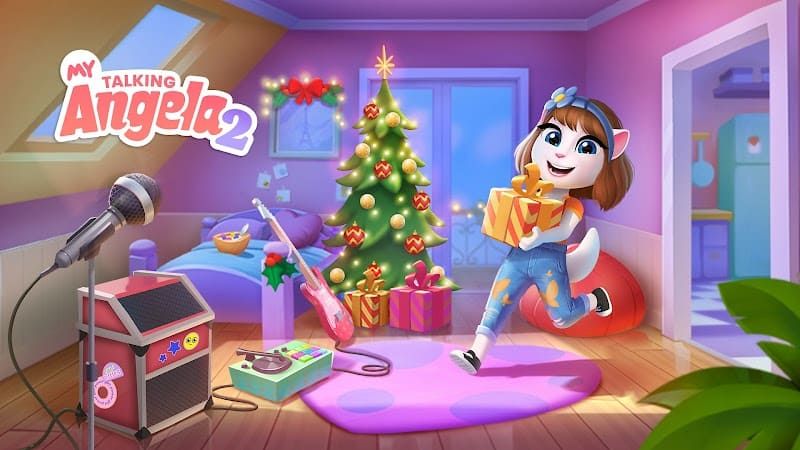 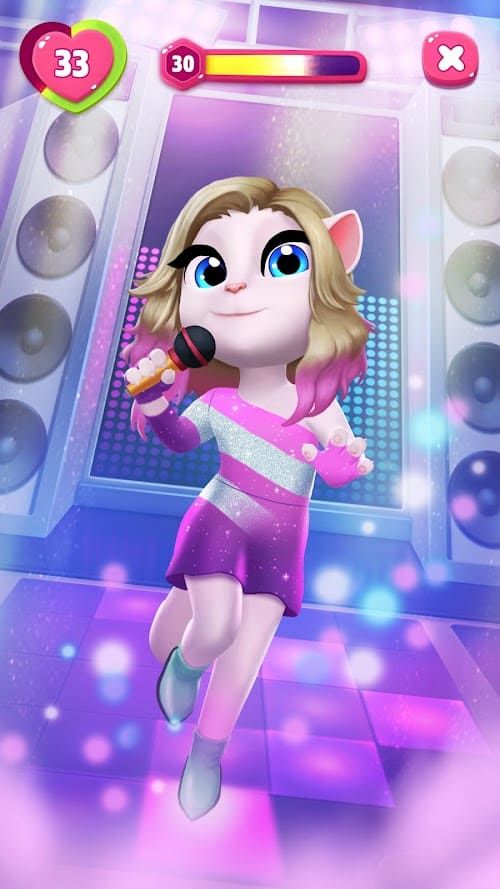 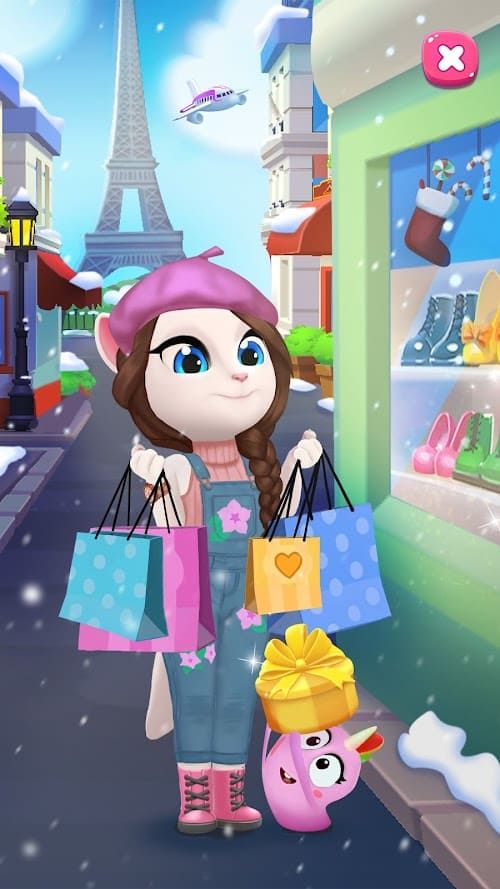 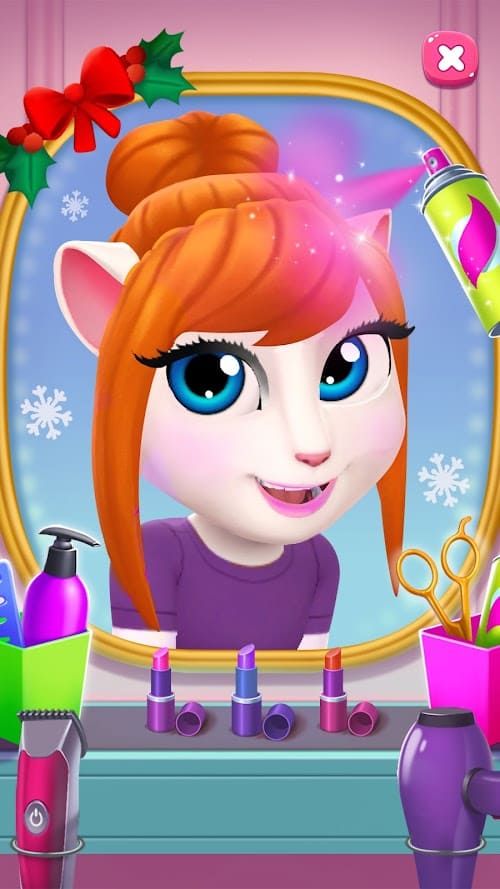 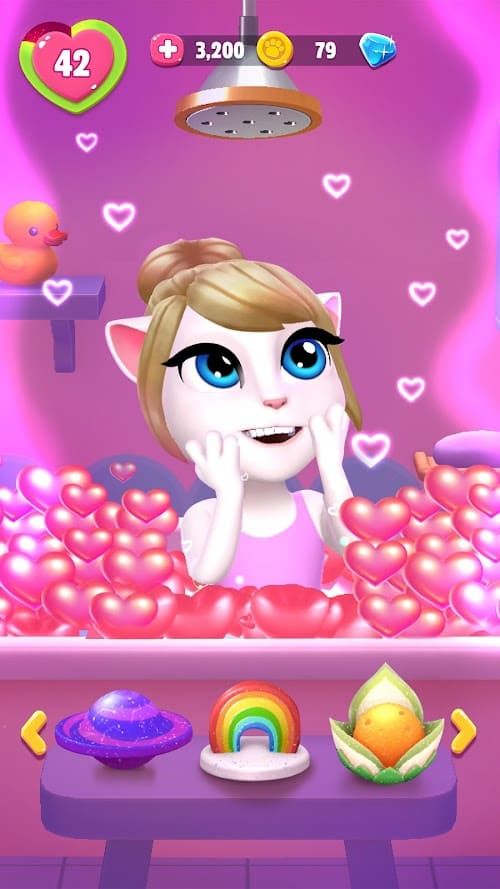 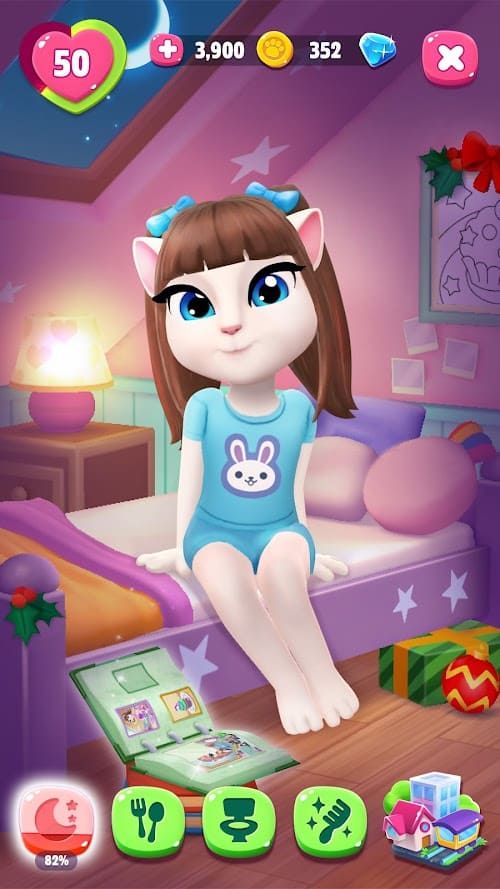 My Talking Angela 2 is a game released by Outfit7 Limited on July 13, 2021, for Android and iOS users. It's the sequel to the original My Talking Angela, which allows players to hang out with Angela, the friendly cat from the Talking Tom & Friends series. Angela is a famous cat in this series. Although she looks cute, Angela is not like a cat, she has a human character, with a lovely round face and a slim figure, it is covered with pure white feathers from head to tail. She has blue eyes, long eyelashes and beautiful eyes. It's a cute cat and an actress who loves fashion, parties and friends.

In My Talking Angela 2, there are no specific goals to do. The game is like a virtual dollhouse, this new adventure is full of new friends, players can go and explore this amazing city, in Angela's world, players can do a lot and have fun. For example, players can feed Angela snacks, brush her teeth and bristles, try the best cakes from her bakery or try new recipes, as well as dress Angela, wear a wig, and dress her up in various ways. dress and accessories, and dance with Angela in the dance studio. After doing all these fun and crazy things, players can also have a special time with Angela, and players can keep showing her their love. In the game, players only have a few of these items to choose from at the beginning, but over time, you can unlock more interesting items, interesting things.

In addition to this "virtual pet" gameplay, the game features challenging but exciting mini-games. Mini-games include "Rhythm", "Cooking" and "Music". Angela will dance in the "Rhythm" mini-game, which requires the player to swipe across the screen in response to prompts that appear as Angela dances. Players can also cook delicious food in "Cooking", which allows players to bake food with Angela. Additionally, players can play a variety of different instruments in "Music" with Angela. In addition to these three mini-games, the game also features standard "arcade" mini-games. For example, in "Slide Pets," players can play a Tetris-like game that continually removes blocks from the screen. Trust me, all the mini-games are easy to follow. As players complete events, you'll earn multiple in-game currencies and diamonds, which players can use to get different wallpapers, rugs, and more to redecorate Angela's house, which is fun and rewarding. These rewards also allow Angela to unlock new content, and players can then fly to different in-game locations, such as New York City and Paris, where you can claim new items.

Another interesting addition to My Talking Angela 2 is that players can allow the game to access the device's microphone and then "talk" to Angela. It's fun and satisfying to meet all the needs of the lovely Angela. I'm sure you'll be happy to meet its every need. When Angela is in a good mood, players will see beautiful petals start to fall. I believe players will be as happy as Angela. You can think of Angela as your friend. Angela has a very nice character. No matter what you do, you will have fun with Angela. If you play this game for a long time, you will naturally form a deep bond with Angela. If you're not there it just misses her. So, you don't refuse to spend a happy time with Angela.

Overall, the developers of My Talking Angela 2 have done a great job with the game's visuals. Its 3D graphics are fantastic and the art of everything in the game is excellent. The visuals of the game are stunning. But it's worth noting that while the game is free, it includes ways to spend money. Make sure to manage your device's purchase settings. However, you can pay some real money to unlock missions if you want. But if you are a patient player, you can complete the other available quests again and again to accumulate a sufficient number of diamonds. After that, you can try all the new levels. Try My Talking Angela 2, accompany Angela to explore cities around the world, you can see the value of true friendship in this game. Angela has been waiting for you for a long time. Please download and install it now.