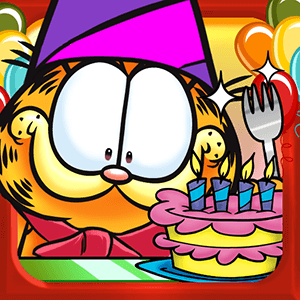 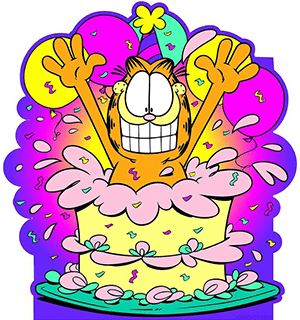 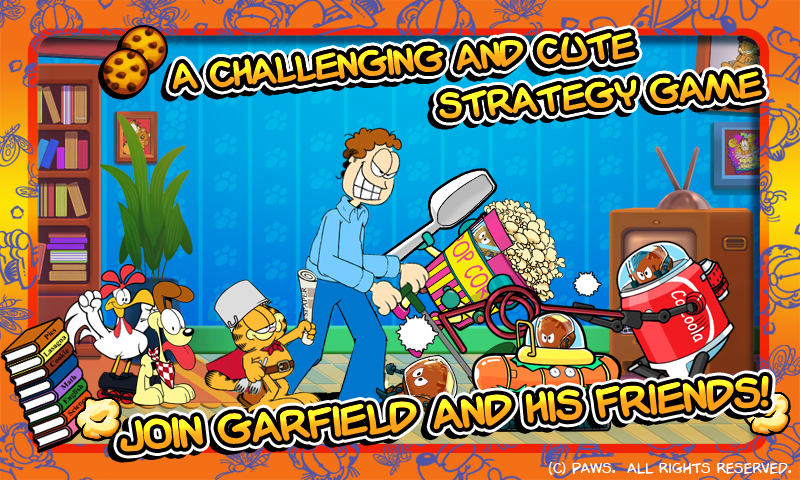 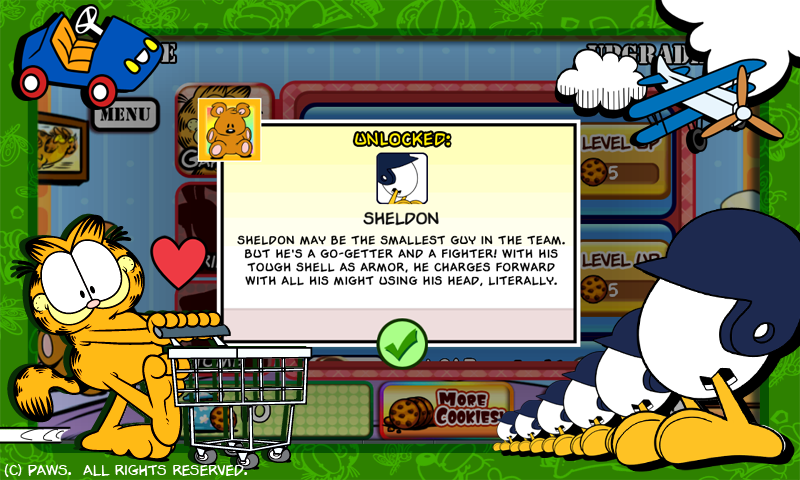 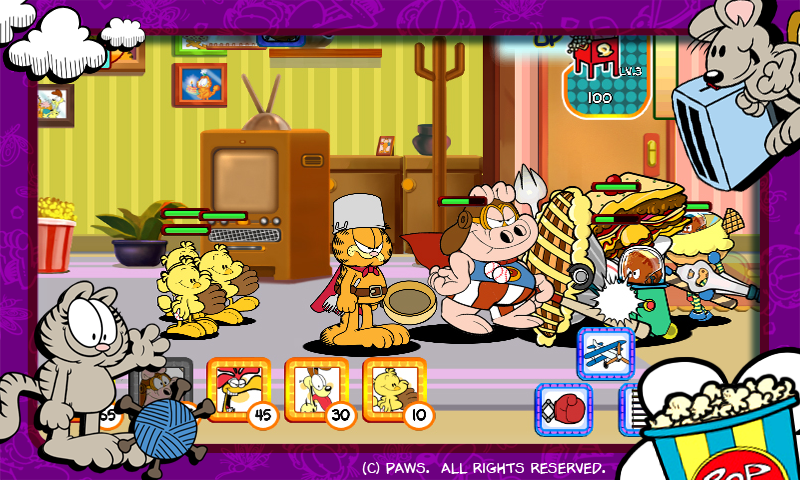 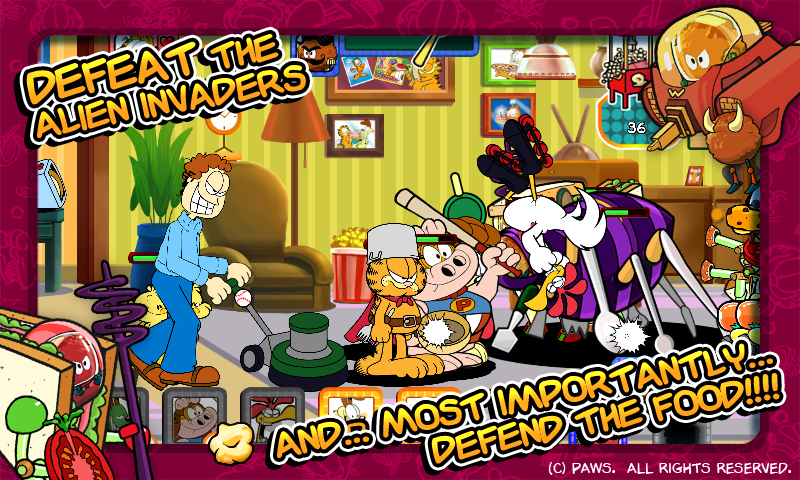 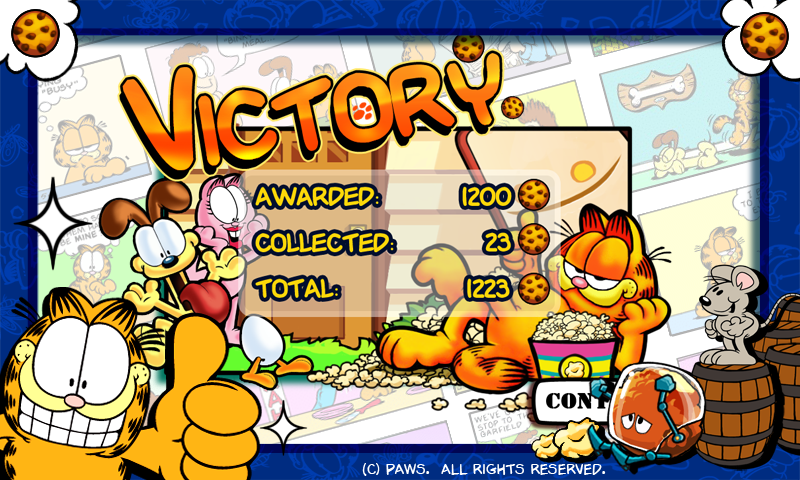 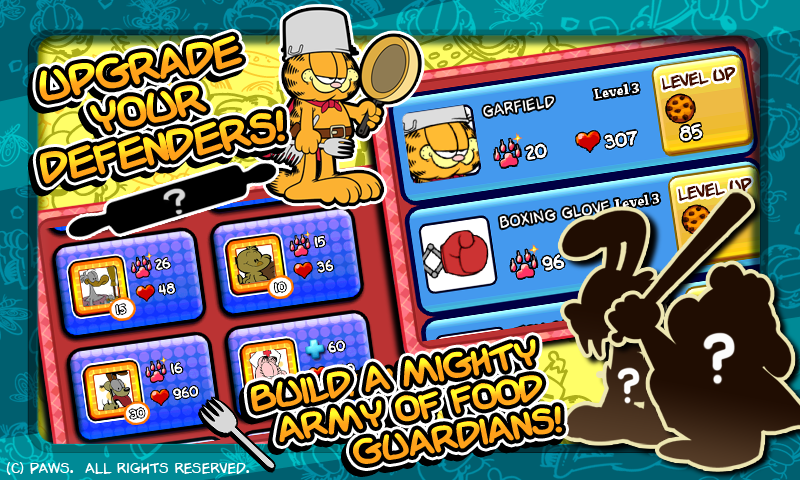 Garfield's Defense combines siege and tower defense in an epic action strategy game. You can play as the famous comic character Garfield and fight against food invaders on 60 different levels. Alien food invaders have attacked the home of Jon Arbuckle and his cat Garfield! They want to capture food and turn it into vehicles and weapons that they can use to take over the Earth. Garfield won't allow that to happen, so you'll have to play as Garfield to protect Jon's fridge from wave after wave of monstrous attackers.

You control Garfield, who has a variety of comical weapons, including forks, rolled-up newspapers, and a launcher capable of firing a dozen cheap plastic toy cars at once. However, the food invaders are not so easy to deal with, and as the game progresses they don armor made of cakes, ice cream cones, pizza, etc., which Garfield can't possibly resist on his own. Sheldon is an early ally who will quickly kick any invader in his way in the kneecaps so you can sit back and throw forks from a distance until your special moves power up again. Later in the game, as you complete more and more levels, you can unlock more new friends and new weapons.

Garfield can summon characters from the comics, including drooling Odie, Nermal, Wade, Orson, Arlene, and Jon. they have different roles, some are stronger, some are faster, and some can throw things. Before starting a level, you choose which friends you might want to summon, and each costs a different amount of popcorn currency to enter the game. While fighting, collect as many cookies as possible that occasionally drop from defeated enemies, which you can put towards Garfield's level, for example, to give him more health, or to make your special attacks more powerful.

As the game progresses, the invaders become more powerful and the more powerful they are the harder they are to defeat. Once you get to stage 15, it's almost impossible to stop the aliens from getting into the fridge without major upgrades. Upgrading Garfield, his weapons, his friends, and other defensive equipment all cost a lot of cookies, and you won't get very far without plenty of patience and careful planning. Of course, this is a freemium game, and you can spend real money to fix this problem. But that also means you have to keep paying real money for this game to keep playing it.

Such ridiculous in-app purchases may leave you a little frustrated. But the fact is that fans who grew up with Garfield in the 1980s seem to think it's forgivable. The game's perfectly drawn animation and Garfield's voice are irreplaceable, and the lure of unlocking familiar characters will keep them coming back for more than the thrill of the actual battle. If you like tower defense games and have a soft spot for orange tabby cats who like lasagna, you won't be disappointed.