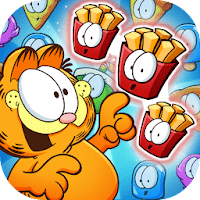 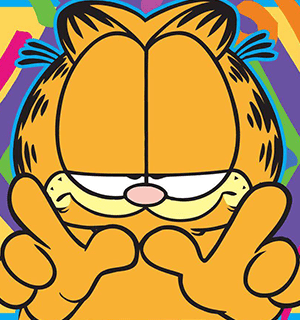 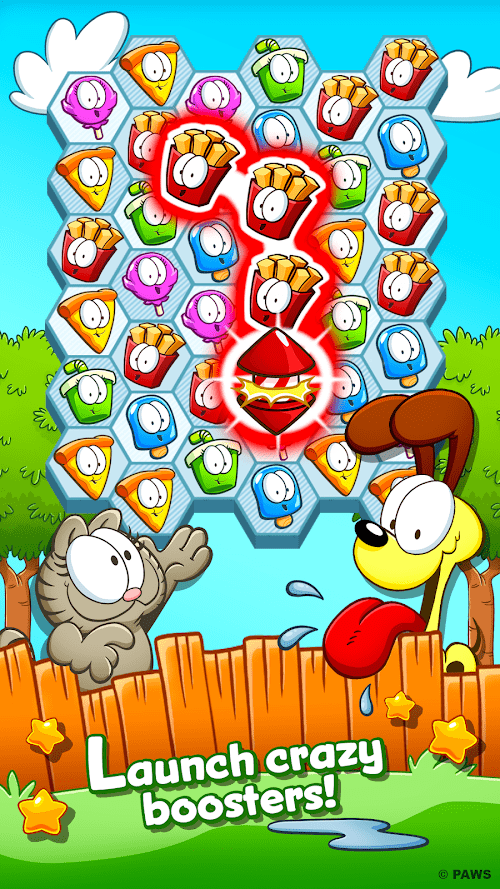 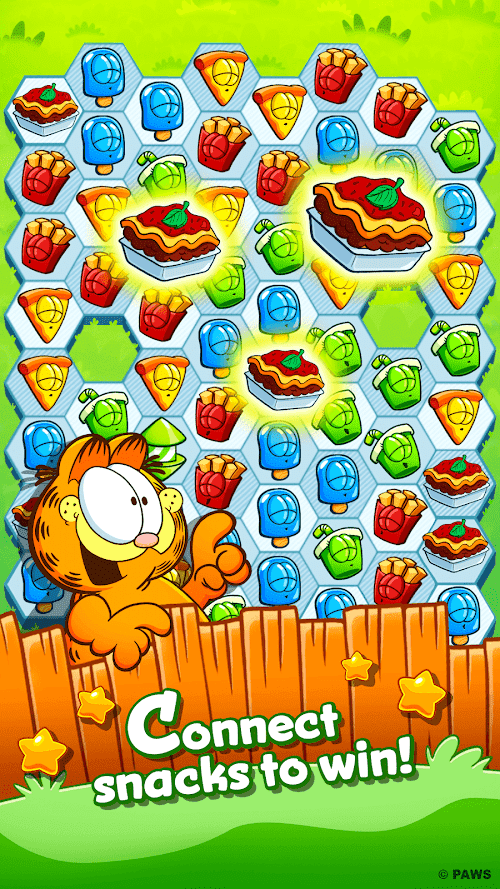 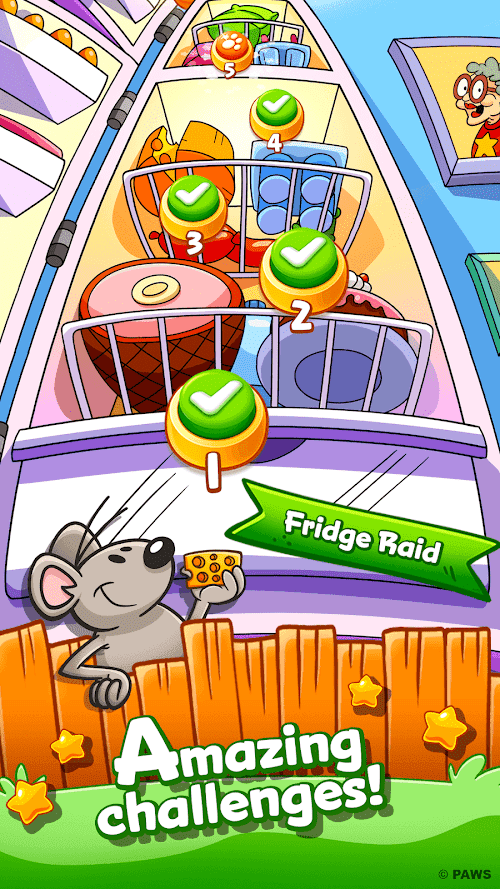 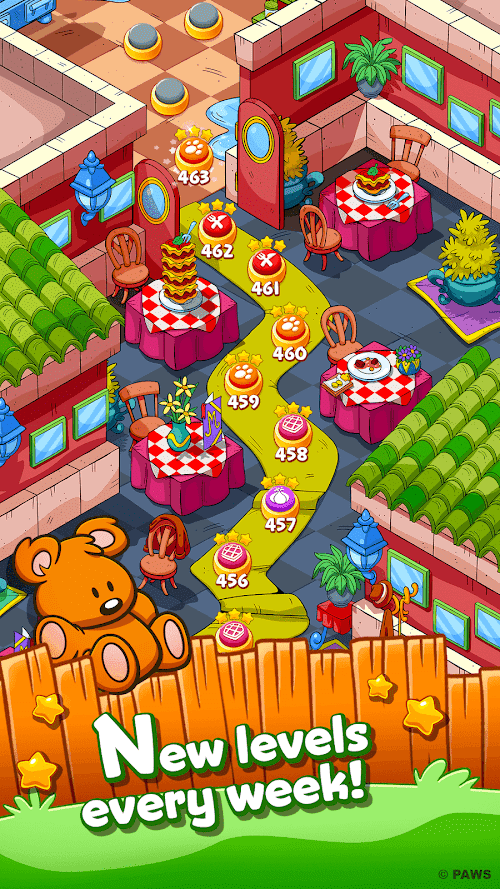 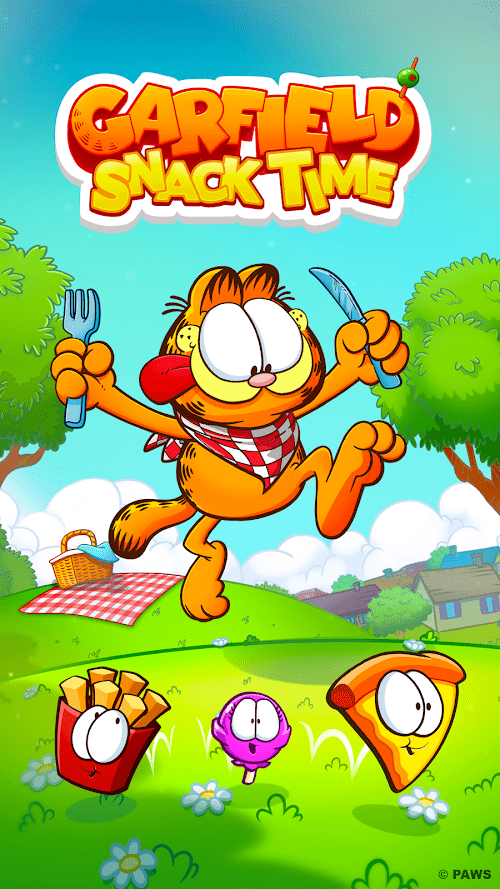 Garfield Snack Time is a strategy video game developed by Grupo Promineo SL and released on iOS and Android in April 2018. Garfield Snack Time is an engaging puzzle where players and Garfield will conquer the gourmet apex. In this game, players will stop thinking about calories and players will consume delicious lasagna, cookies, cakes, and ice cream. For a delightful meal, form a row of three or more objects and blast them. Collect incredible combinations from the shards of Lazagany and give players the will of imagination and taste. Players can explore the unforgettable world of Garfield and check out 6 different game modes to pass 1200 levels. In Garfield Snack Time, players can meet Garfield's cute and diverse friends and enjoy unlimited adventures.

Garfield fans offer a Candy Crush Saga-like experience at Garfield Snack Time, so players can play with the chubby feline for hours. The most important difference between Garfield Snack Time and other games that require players to match gems or gems of similar color is that here, players must choose snacks that are grouped together. In Garfield Snack Time, players don't have to move elements to remove them from the board but instead connect the most similar elements. The more treats the player manages to connect of the same type, the more points the player adds to the box and the sooner the player can move on to the next level. One of the great things about this game is that there are a lot of levels to complete. Although this game is geared towards children, with its low difficulty level, any Garfield fan in the world can enjoy this game.

Garfield Snack Time pays homage to one of the most popular fictional cats in the world, a tabby named Garfield. The premise of the game is that his furry companion finds himself hungry when he wakes up. The game requires players to feed Garfield and friends in a simple and fun match-3 game. To fill his belly with a variety of delicious food, the player needs to play a match-3 game. If players have played several similar games before, this one should be no different. The basics are the same. Players only need to string three or more similar items on the board. But the game also knows how to differentiate itself. First, grids are not box types. Instead, it looks like a honeycomb, which means the items don't line up together. Also, it doesn't matter which direction the player wants to go if the player can link the same objects on the board. Therefore, it is easier to do a combination of more than three items.

Garfield Snack Time also has a clearer gradient rhythm in terms of difficulty. During the first few rounds, players can create matches regardless of the number of moves. Once the player gets the hang of it, the game introduces you to a limited number of moves. In more advanced levels, players will encounter some additional items on the board. These can include waffles, which players need to clear before more action can take place. As the game progresses, players may feel a little overwhelmed with how to continue or complete a level. This is where boosters come in handy. They don't appear early in the game, probably because you don't need them yet. As players progress to higher levels, different rewards, including boosters, are available. These boosters can include rockets, which help clear most of the board, allowing players to finish the game earlier. Also, the game continues when the player has moved left, so the player can further improve the score. This is helpful if the player is playing the game with friends. If the player runs out of boosters, the player can buy it with real money, or the player can invite your friends to play together. The latter rewards you with gifts.

What makes Garfield Snack Time even more interesting is the graphics. The illustrations are beautiful, and the colors are vibrant and vibrant. They're cute too, which makes the game even cuter. The game is a fantastic and fun tribute to everyone's feline friend. The game itself is engaging, strategic and unique. In Garfield Snack Time, players will travel back to childhood days filled with cute cat memories. Help cute Garfield now. Garfield has a bad morning and the only way to cheer him up is to buy him food, and a lot. Players can do this once you've played Garfield: Snack Time. So, download it now and start connecting all the treats to make sure the adorable Garfield doesn't go hungry.