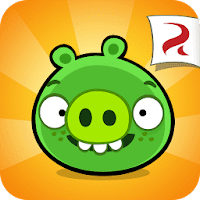 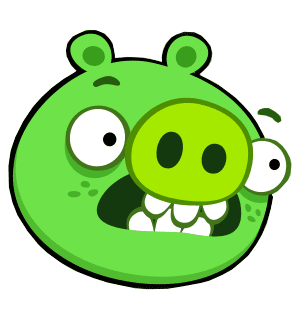 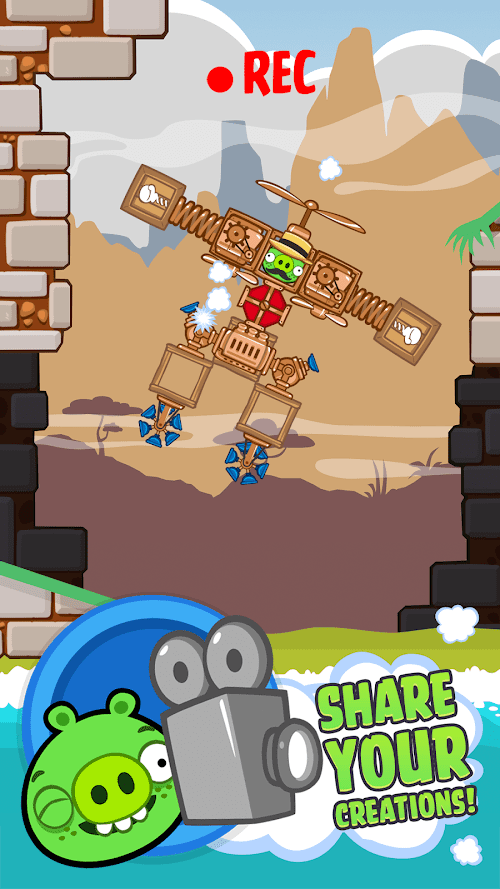 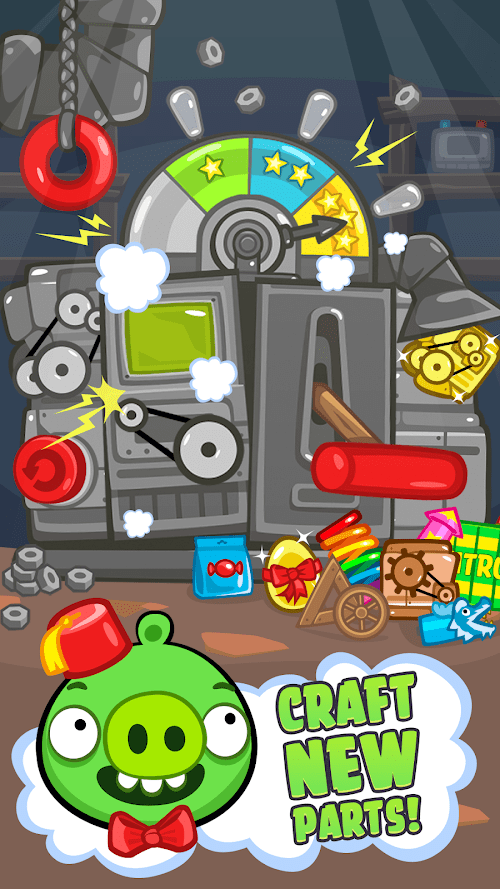 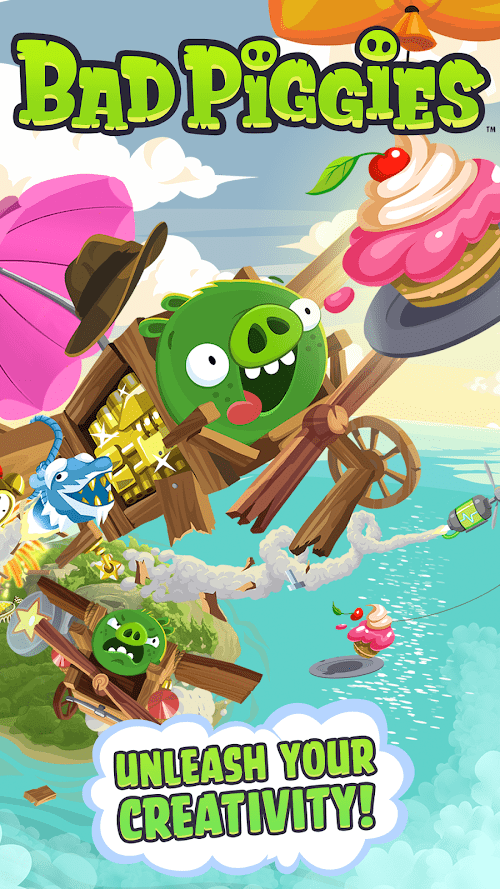 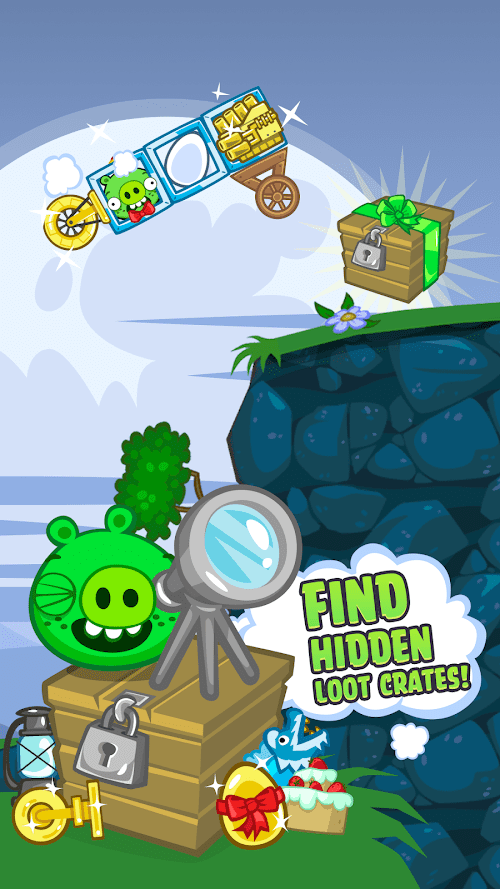 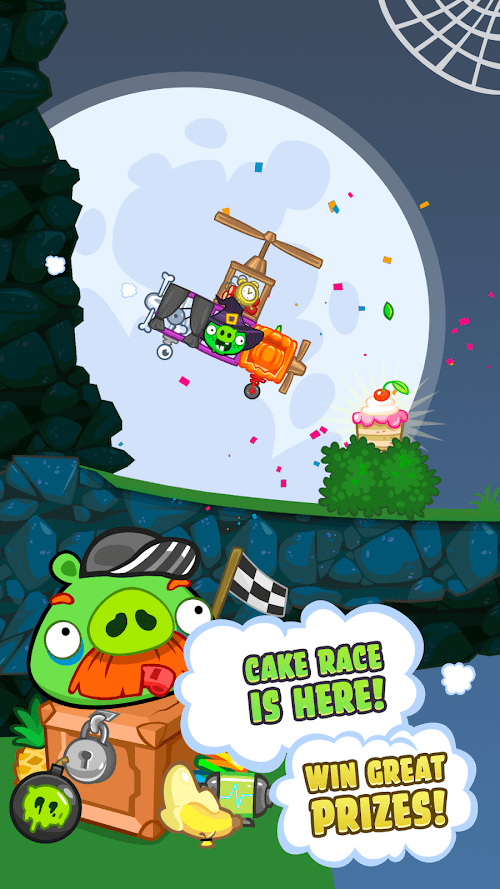 Bad Piggies is a fun puzzle game developed by Rovio Entertainment Corporation that combines the charm and addictive features of Angry Birds but adds creativity, logic and a flying pig ship. While Angry Birds' wonderful art style remains, along with some new cute and catchy music and sound effects, it's not an Angry Birds clone where players can throw pigs on the screen instead of birds. This is a whole new game. However, in-game scoring is the same, with players earning stars based on achievements in each level and progressing into new and often more difficult puzzles.

Bad Piggies take the victimized pigs from Angry Birds and put them at the helm. The point of the game is to build a contraption using parts like wings, propellers, soda bottle rockets and mechanized wheels, and the whole process involves transporting pigs from the start to the finish line. Players need to be crazy builders or inventors and help the green pigs build contraptions to reach their goals in each level, all to get these eggs from Angry Birds. This game is great fun because there is no one way to complete a level, and players can combine trial and error, physical intuition, and ingenuity to design these cars, flying vehicles, and burning cars the way, the player sees fit. Players can also use these acquired skills to complete a wide range of levels and challenges.

The whole game is inherently not easy, the player must find the best way to transport the piggy to the finish line. But it's not like a traditional puzzle because there's more than one way of doing things. If you've never played this game, you can try it once, and you'll see what I mean, and at the same time, the game will translate into a lot of fun on your phone. This means that when you finally crack the difficulty of the game, you will feel good about yourself because you conquered it through sheer logic, creativity and problem-solving skills.

There are currently three different game modes, Ground Hog Day, When Pigs Fly, Sandbox, and each stage includes dozens of individual levels. Ground Hog Day is all about ground vehicle builds; When Pigs Fl utilizes flying contraptions like balloons and propellers; Sandbox allows players to use any unlocked object to capture bonus stars across a larger play area. Once you pass the preliminary level, you will unlock sandbox mode. Each sandbox is a huge level with lots of items to collect, and lots of tools to build. As the player completes more levels, the player will unlock additional items in the sandbox mode, providing the player with even more stuff. Additionally, Rovio has a fourth game mode coming soon in Bad Piggies.

Although Bad Piggies is a very new version, Rovio is constantly tinkering with Angry Birds, and players can expect plenty of updates and additions over the next few years, at the same time, it still has many different game modes and challenges to complete. attract players' interest.

Bad Piggies is a refreshing change from the makers of Angry Birds. It's essentially the Angry Birds engine being put to a different and better purpose, making awesome cars, flying machines, and rockets to propel the piggy to the finish line. I think it's much cooler than shooting birds with a slingshot. There's more to do in the game, more room for creativity, and more reasons to come back and play again. Right now, since the game is the latest release, there isn't a lot of extra content, but as the game takes off, players can expect new game modes and upgrades to make it even better. It still has that great Rovio flavor without feeling the same old. If you're looking for a new puzzle game to keep you busy, Bad Piggies is worth playing.