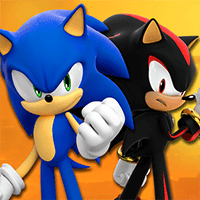 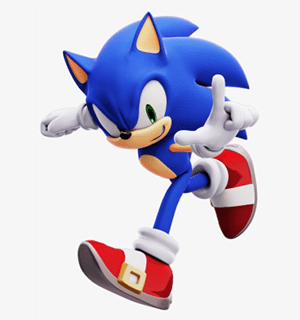 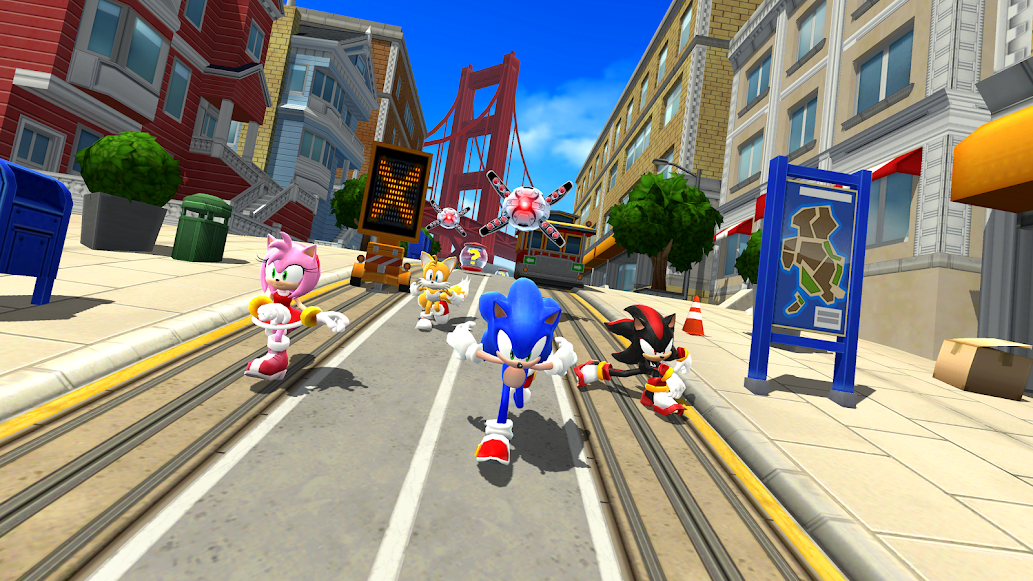 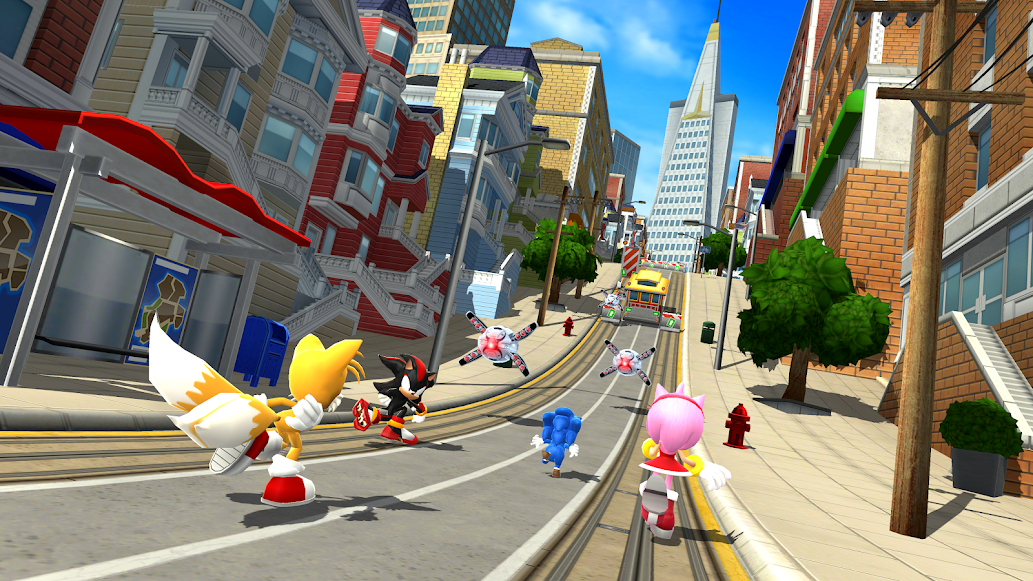 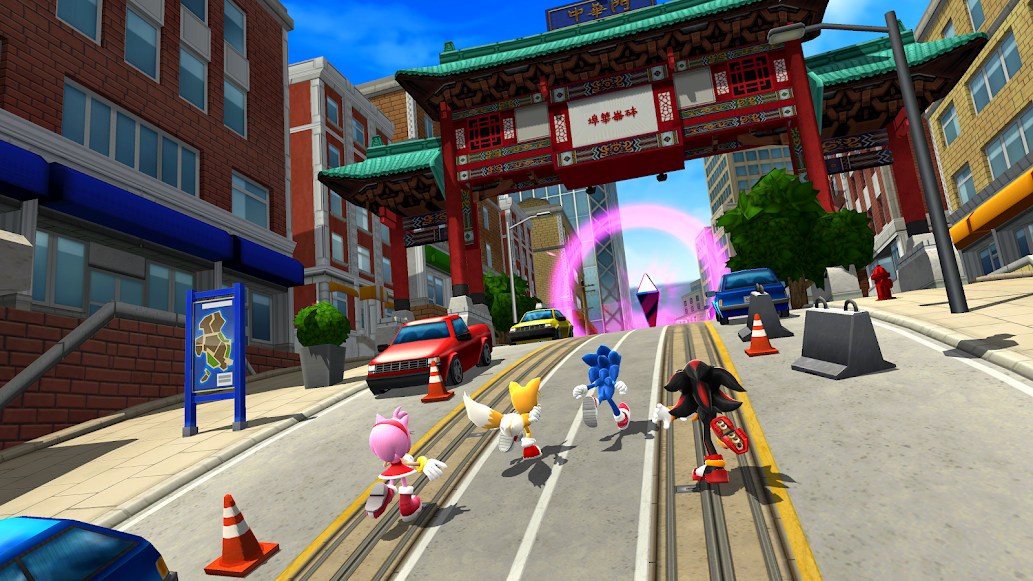 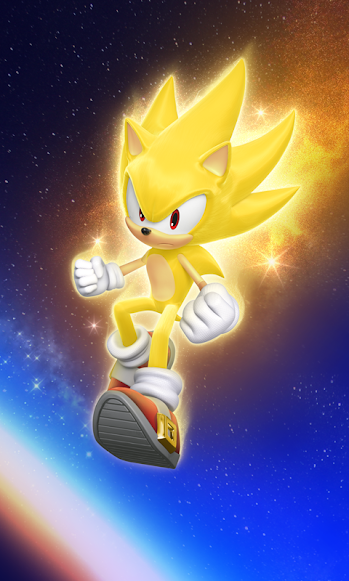 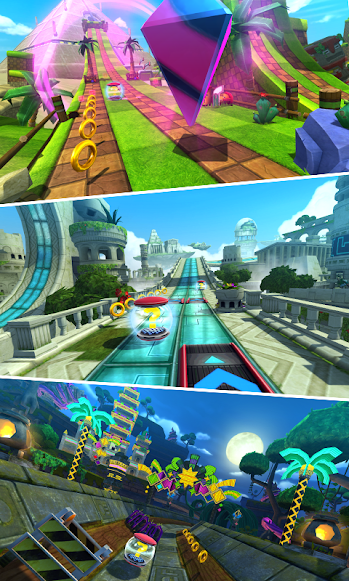 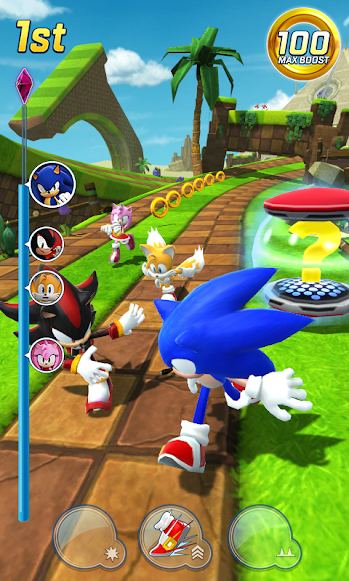 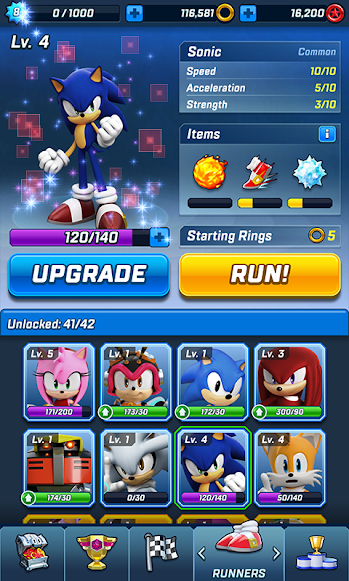 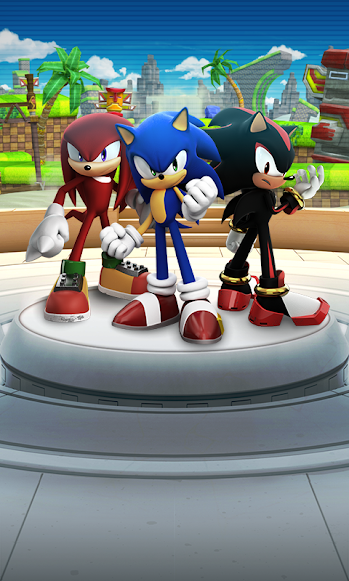 If you like classic Sonic and classic SEGA games, you'll love playing Sonic Forces! It's a clever twist on the auto-run genre to multiplayer, with plenty of surprises and constant progress to ensure you never feel like you're going nowhere. Aside from the name, this game has practically nothing to do with the latest blue hedgehog adventures on PC and consoles. After launching the app and completing a short tutorial, we found ourselves in Temple Run, an endless parkour game, and therefore in third-person view, but featuring four different lanes to move around to avoid obstacles along the way, even by jumping or sliding.

Why four lanes instead of the traditional three? It's easy to say: Hardlight developed an experience-based entirely on competitive multiplayer, which means that in each race, four real players are put in the same speed race, and your overall goal is to beat the other three runners until the end of the level by avoiding obstacles and deploying power-ups at the right time. There are four power-ups available - a projectile that moves along a lane until it hits a wall or an opponent, a trap that covers every lane except the one you're in, a speed boost, and a shield.

What makes it even more interesting is that as the game progresses you can unlock different characters, each with different ability boosts, as well as their stats. The large roster of unlockable characters ensures that many different skills can be used during a match, which adds another layer of strategy to the game. Fireballs? Loose cannons? Discharge of electricity? Nothing is missing, but most importantly, there is a fairly clear distinction between the main characters, leading us to choose their avatars based on how we like to focus on offense or speed.

Collecting the inevitable rings allows us to speed up, just like a traditional speed ramp, but the key to success lies in precision and quick reactions, as any shock can slow us down enough to make us lose. At the end of each game, points are collected to improve the global ranking, which unlocks new scenarios. This means that by investing more time in the game, in addition to the aforementioned unlocking of new characters, we will be rewarded with a wider variety of settings, all of which can be upgraded using the rings collected and some cards obtained through treasure chests. The freemium aspect of the product is reflected precisely in the wait time to open loot boxes and most importantly in the ad trailer that automatically starts at the end of each match and can only be skipped after a few seconds.

Overall, Sonic Forces: Speed Battle is fun to play, although it's probably best experienced in short bursts. If you're willing to put in the time, nothing is stopping you from playing forever, and each level has multiple routes and will make you want to keep running as you do a lot of unlocking. But if you don't want to pay real money, there's a lot of grinding to be done before you can open new levels, and after the 100th run through the same two stages, you may start to get a little bored with the experience.