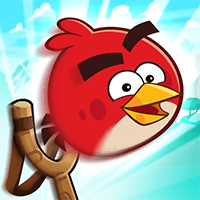 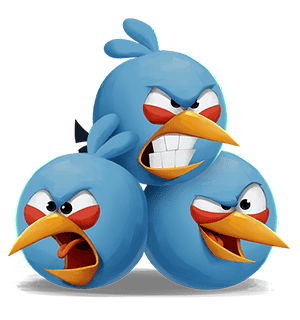 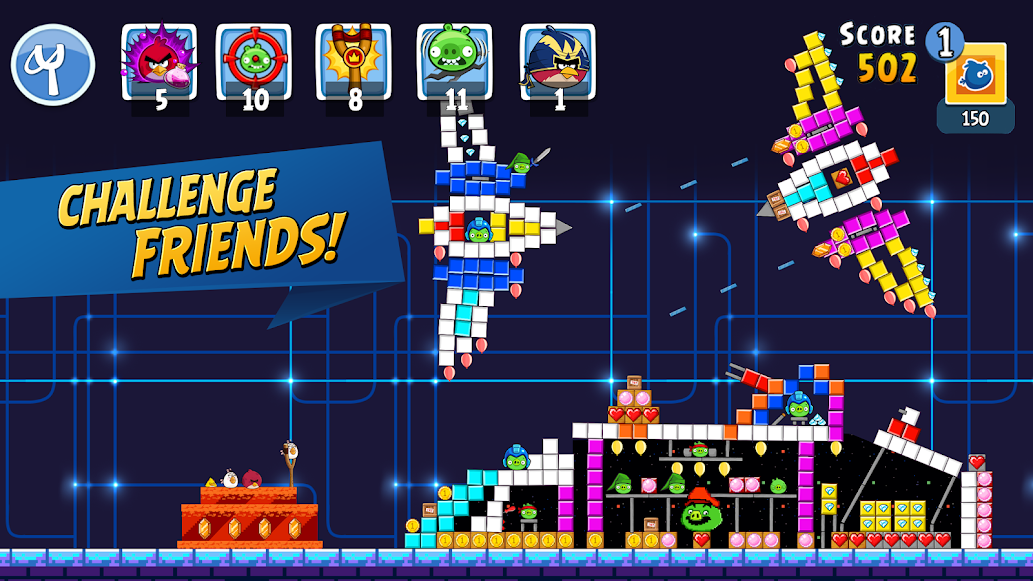 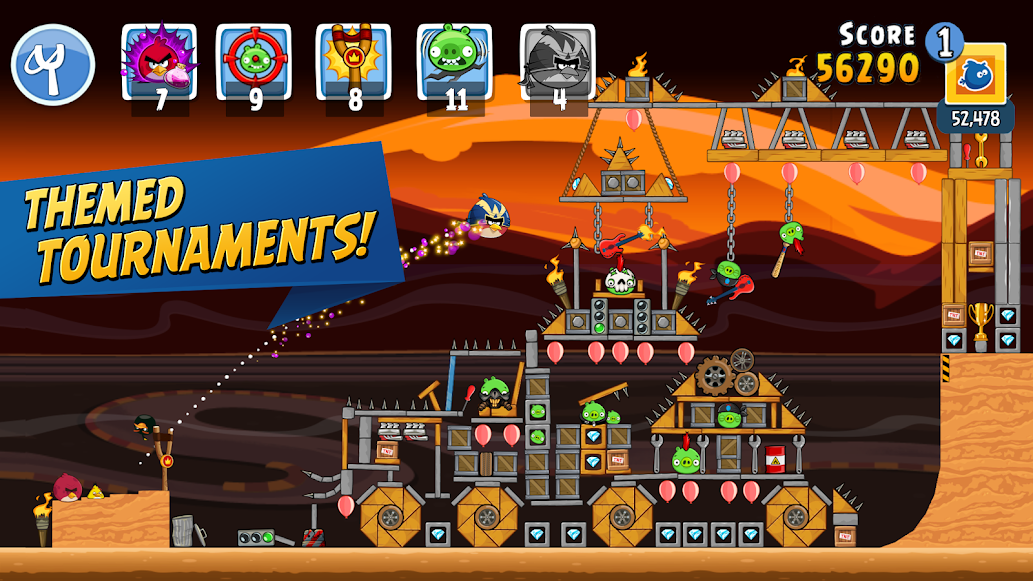 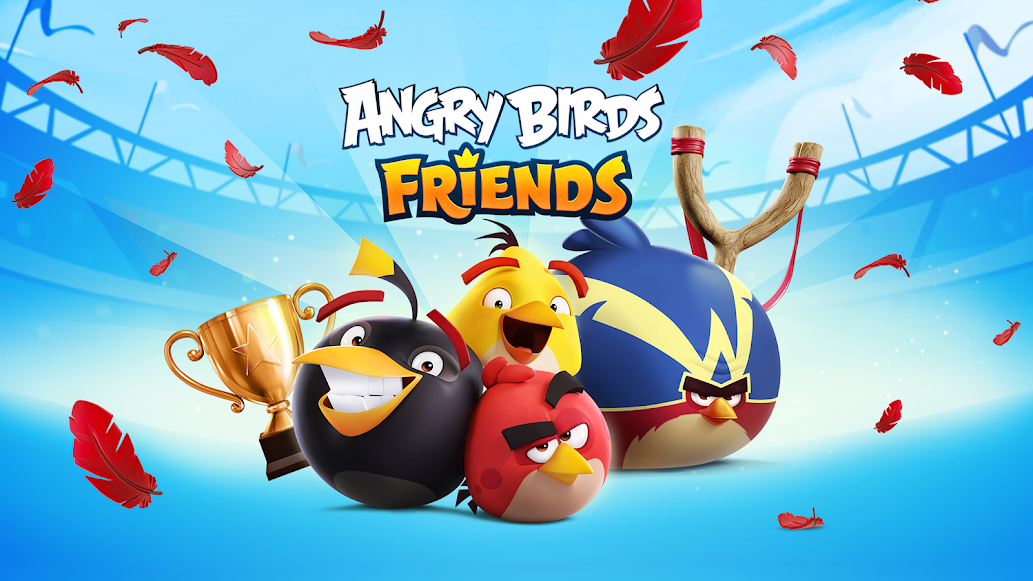 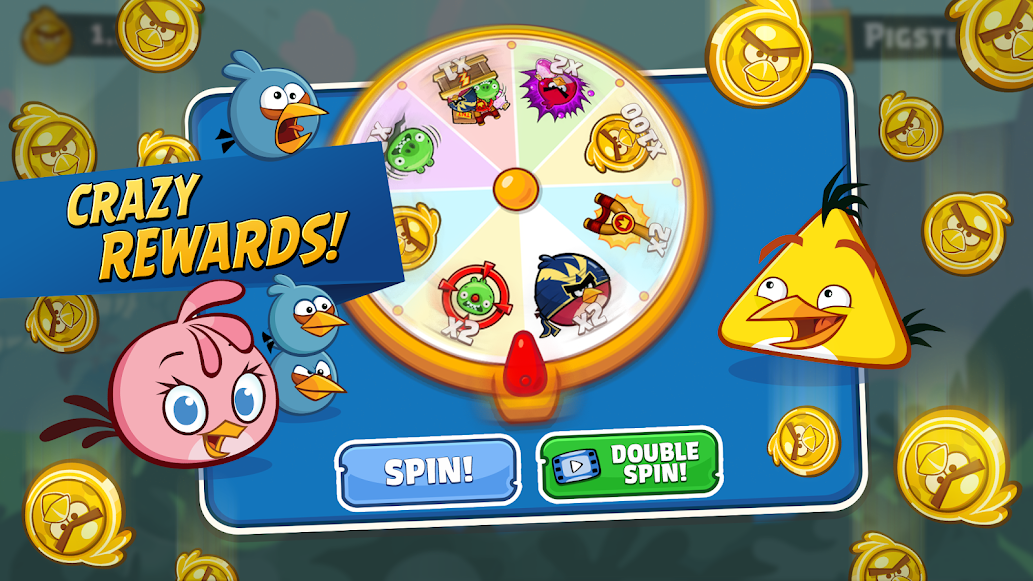 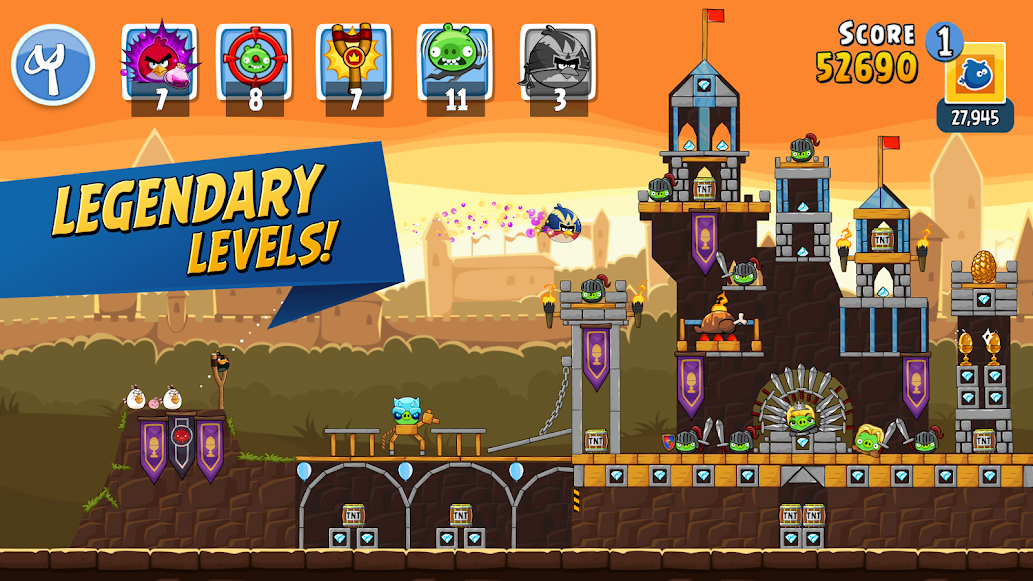 Angry Birds Friends is the social version of the popular mobile game series, and playing with your friends via Facebook is the biggest highlight of this game. You can send invitations to your friends, send them gifts, and more to get them to participate and play with you. However, this doesn't mean that Angry Birds Friends is a multiplayer game, is a single-player game with leaderboards. Players play six new maps each week in a series of rotating tournaments where the goal is to get the highest score. Their opponents are friends on Facebook and in their mobile or tablet contact lists. When participating in a tournament, you can open the tab on the right to see who is ahead.

As with other Angry Birds games, players drag and tap their fingers on the screen to aim and launch birds from a giant slingshot to destroy buildings and destroy the pigs hidden within. Players can retry levels as many times as needed without penalty, giving them the freedom to try different strategies until they have mastered the level. Gifts come in the form of power-ups, and the top 3 winners each week receive in-game currency called bird coins, which can be used to buy power-ups or get extra bird pitchers. there are many power-ups in Angry Birds Friends, including slingshot power-ups, replacement birds, bird power-ups, and even laser sights to help you aim better at your target.

As for the graphics and music of the game, they are everything you know and love from the Angry Birds series. The graphics are clear, the focus is concentrated, and there are many colors. The sound is whimsical and funny, just as usual. You might even feel that you are still playing the old version of Angry Birds, just introducing some new birds. Nothing special, but you have to appreciate its consistency because it is still pleasant. The powers and upgrades alter the appearances of the birds, the slingshot, and other parts of the level. Due to it being zoomed out more, when things go boom, it’s a lot more fun to watch things go flying around.

I think the game is good in terms of gameplay and features. Its biggest drawback is in-app purchases. The game starts well and fair, and then you will soon be unable to get a fair chance of progress in the game, and you will be very frustrated with the game then. The props in the game are magic weapons to help you pass the level smoothly, but they are not so easy to obtain. As the game progresses, the difficulty of the level increases, and you will have to buy items with real money, otherwise it will be difficult to complete the level. Therefore, if you are not willing to pay real money, it will be difficult to continue playing. I can say that to a large extent this is a pay-to-win game.

You may be attracted to all the traditional Angry Birds elements, and the social aspect will certainly excite you. But if you have no intention of paying for the game, then this game is not the best choice.